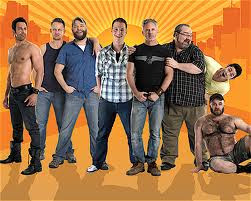 Tyler is a pale skinny twink who has a passion for Bears.  The hairier and bigger the better.  ( If you’ve no idea what I am talking about here, then you  better skip this one entirely as its not for you).  Tyler sets out to hunt himself a furry Daddy in this cute romantic comedy set in NY’s Chelsea District and billed as a ‘Bears meets Sex In The City’ which, with the lack of any clever banter, it clearly isn’t.
It does have a few comic moments such as when a couple decide to try and have an ‘open relationship’  with hilarious consequences, but it’s just that the script generally tries too hard to be funny like the really bad actors in this movie who over shadow the couple of really good ones in the cast.
All said and done if Bears are your ‘thing’, and your expectations are low and your glass is full, then you’ll enjoy this feel-good movie.
P.S. Who Tyler actually ends up is a hirstute muscle man without an ounce of fat on his body …. but hey, I’m not one to quibble on the finer details.