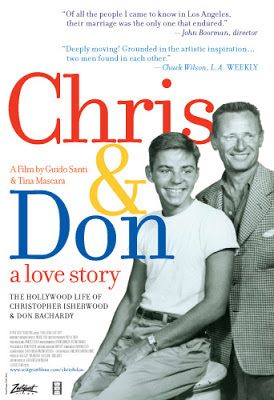 When celebrated British Author Christopher Isherwood met a particularly young handsome man in his speedos on a  Santa Monica beach in the 1954, he was already 48 years old.  The boy, barely 18, and looking even younger, was Don Bachardy. And against all surmountable odds the mutual attraction between these two extremely different men, developed into one of the first and most enduring openly gay relationships in Hollywood that only ended some 34 years later on Isherwood’s death.
With his wit and his talent and his considerable professional reputation Isherwood was able to protect both his new love and their unconventional ‘marriage’ and defying all the social conventions of the period refused to keep their life together hidden away behind closed doors. As Bachardy recalls in this excellent documentary, their age and totally different backgrounds (Isherwood was upper-middle class and Bachardy’s family were decidedly blue-collar) created a power imbalance which made the going tough at times. However it is obvious that the older man prevailed as just in the very telling, one can see that several decades later Bachardy has assimilated and has many of his Brit partner’s mannerisms even. 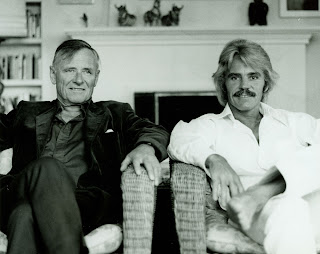 They had rocky periods particularly in the early 1960’s which were exasperated by sexual encounters outside of their relationship and which contributed in part to Isherwood penning his novel ‘A Single Man’* when he panicked about living without Bachardy. But somehow that in the end actually strengthened their bond …. along with Isherwood’s strong political consciousness which was very much about improving the rights of homosexuals including coupling. 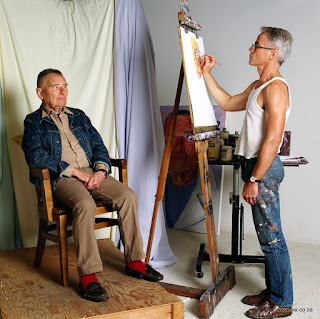 The older man encouraged his partner to develop his own creative talents, and sent  him off to Art School where he flourished and laid the foundations of becoming a very successful portrait artist, and which in turn helped balance their relationship. The telling of this enchanting story is greatly enhanced by the fact the couple were avid users of a cine camera and the footage with them and their celebrity chums makes a compelling picture.  What comes through this …… and in fact the entire documentary  ….. is the unquestionably deep love and respect that these two extraordinary men had for each other. It is a remarkably glorious union …. completely ground-breaking and you can be easily be forgiven for thinking that the title should be changed to read  THE Love Story.
* Later made into a movie by Tom Ford