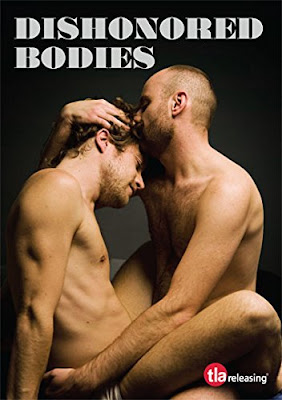 Juanma Carrillo is a Spanish independent filmmaker, producer, photographer and occasional musician whose collection of short movies are always highly intriguing, extremely sensuous, often avant-garde art pieces of art, but always immensely engaging. He seems to set out to shock and titillate his audience,  and is not adverse to adding a few humorous touches, and even showing his romantic side some times.
This newly curated collection of 9 movies which were shot between 2009 and 2012 carry the name of one of his early movies from 2010 called ‘Dishonoured Bodies.’  One of the standout films of this set is ‘Scaffolding’ the touching tale of two neighbors in a Madrid Apartment building who are thrown together one summer when the landlord covers the building to carry out repairs, and by the time it is finished, the roof is not the only thing has been fixed up.   Carrillo uses another construction site for ‘Wall’ which he fills with the sound of noisy machinery as we witness a man being dumped by his boyfriend unable to hear what they are saying, and then they use the wall to finally vent their feelings. 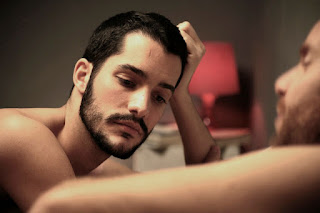 The funniest one of the group is ‘Fuckbuddies’ when two married men trying to have sex in a car discover that they have a lot more in common than they had thought. The most extravagant and intriguing movie is Carrillo’s latest one shot in 2013 and called ‘Nineteen Forty One’ where he has let his imagination really run riot.   For ‘Perfect Day’, probably the sexiest movie in this group, Carrillo is also in front of the camera showing that he also looks very hot too.

The final movie ‘Cannibals’ is set in a cruising area in a forest where hundreds of men are looking for sex but one ends up with much more than he  had ever expected and is a very funny thriller and a great note to end this excellent compilation from one of Spain’s best contemporary queer filmmakers.