By the time that Edie Windsor spotted Thea Spyer across a crowded Manhattan restaurant in 1962 she was already divorced and in an attempt to defuse her lesbian tendencies, had been through several affairs with men. These two very good looking women in their early 30’s took an instant shine to each, and as they relate their story now some 40+ years later, they are adamant it was love at first sight. And when you see how tender and affectionate they still are, you simply do not doubt their sincerity.

This charming documentary about their years together is a tale of privilege and joy as the wealthy couple shows their life through an archive of photographs of their extensive travels.  Both had successful careers: Edie had worked away up the ranks at IBM and Thea had her own psychologist practice. Even when Thea was diagnosed with MS when she is 45, this hardly curtailed their life, and as her health deteriorated it simply propelled the two women to live their lives to the fullest. 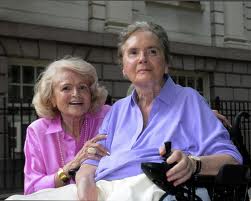 Not long after Canada passed a law allowing same-sex marriages, Thea was warned that her time left was limited and so the two immediately set about flying to Toronto to get wed.  When they exchanged vows in 2007, it was exactly 40 years since Thea had first proposed. It had been their friends said as they celebrated, a very long engagement.

Edie passed away in 2009, a happily married woman. Her relationship with Thea was a joyous commitment full of love and hope, and although the movie focuses on the social and personal aspects of their relationship without touching on any of their interaction with society, the simple fact that they were married is also a very strong political statement on its own. I’ll defy anyone not to want to grab the box of Kleenex several times as the women talk about what joy their life has been together.

And their advice to others on how to make a relationship work? Never stop dancing or having sex!

P.S. The reason to revisit this compelling documentary is that since Thea’s death, Edie has become more politicized especially after she was in a hospital recovering from a heart attack and was hit by the Federal Government with a massive inheritance tax bill simply because they do not recognize her marriage.  She fought back hard, and last October after a lengthy battle the 2nd US Circuit Court of Appeals ruled in her favor.  This followed a similar judgment from a lower Court that stated that the Defense of Marriage Act violated the Constitution’s equal protection clause.  And now her case is one of two that the US Supreme Court has chosen to finally rule on the whole constitutionality of the Defense of Marriage Ace hopefully once and for all.

When you see 83-year-old Edie being interviewed on the media now about her new role as a reformer, you are struck by the sheer niceness of this intelligent, articulate and selfless woman who exudes calmness without any hint of the strident militancy anyone else in her position would have taken.  She is this improbable heroine who like her marriage was, is a fine example of how to conduct life. I take my hat off to her in sheer awe.