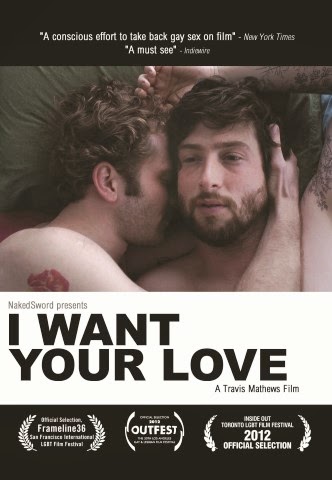 For some unexplained reason 30 year-old performance artist Jesse is forsaking his life in San Francisco to move back to his family home in Ohio, and he is very unsure if this is a good decision. His room-mate and best friend Wayne is throwing a going away party in the apartment they share, and he has his own dilemma as he is having second thoughts about having asked his boyfriend to move in. Jesse’s biggest doubts seem to hang around his reluctance to move away from his ex boyfriend Ben who he obviously has feelings for, albeit confusing ones at best.  Luckily for Jesse he finds a mentor he can open up too at the party in the shape of his older neighbor Keith …. also an artist, and also attracted to Jesse in a non fatherly way too.
This edgy wee film shows this tight section of very likable gay men in a close knit community that are all in a quandary and at a cross roads of their lives.  Their situations are very real and natural as are their sexual encounters, but that’s because they are exactly that. Filmmaker Travis Mathews has infused his narrative with un-simulated sex scenes i.e. pornography in this character driven plot which takes this current new wave of Queer Cinema one giant step forward. 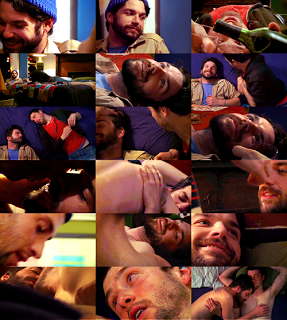 I’ve procrastinated longer than usual in writing my review on this movie  …. not because of any negative views on pornography (which I certainly don’t possess!) but my initial concern as to whether the explicit sex scenes overwhelmed the narrative, or if indeed I was too impressed with the whole novelty factor to make a valid judgement.  On reflection I now fully appreciate that the sexual acts … beautifully performed and photographed by the way … are an integral part of the whole piece.  (But did it really matter if they weren’t anyway?) And the fact that it is breaking barriers doesn’t alter the bottom line that this is a remarkably good movie. By using performers and performance artists and not actors, Mathews has added another level of reality to his movie that almost gives it a quasi-documentary feel at times.
The movie financed by Naked Sword an established pornography company played the festival circuit last year including N.Y.’s prestigious New Fest and won the approval of Stephen Holden of the NY Times.  It made a bigger splash earlier this year when the Australian Censors banned it completely causing James Franco, Mathew’s friend and collaborator on ‘Interior Leather Bar’ (which incidentally is not nearly as good as this) to loudly publicly defend it.
Hot on the heals of Ira Sach’s ‘Keep The Lights On’, Andrew Haigh’s ‘Weekend’ and David Lambert’s ‘Beyond The Walls’ this is another rather excellent and totally engrossing movie that tells that a story about contemporary gay lives that are not picture-perfect, that do not shy from the truth, and are resilient, strong, and most of all, very relevant.

If this clique represent the future of queer cinema then the future is very rosy indeed.