Sometimes even obsessed cine-philes let a wee gem slip past them, and this is one from 2004 that I was so thrilled to catch up with.

This Sundance award winning doc. about the infamous former First Lady of the Philippines is a sheer delight and shows what a consummate actor Imelda Marcos is.  She believed if she behaved like royalty then people would treat her as if she were. Naturally this was not at all selfish as she kept asserting,  she only acted like a star cos it made all the poor people in her country very happy.  Hmmm! 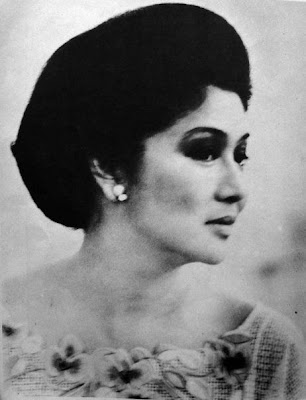 The film follows her from her youth as a glamorous Miss Philippines beauty queen. Well, she actually came in 2nd but bullied the judges into reversing the decision: so she sort of started as she meant to go on.  She wed handsome Senator Ferdinand Marcos after an 11-day courtship, and their marriage suited each other for different reasons.  But one of the undisputable facts in the story is that without Imelda, Ferdinand would never have won the Presidency at the early age of 36.

The movie doesn’t attempt dig up any new dirt about the corruption and intrigue that has filled her later life because it is already so well documented.  And frankly there would be little point as Imelda is THE Queen of Denial: sitting as cool as a cucumber she calmly refutes anything and everything as mere rumors and gossip without blinking an eyelash. It is a wonderfully delicious performance and you never ever get a glimmer or hint to see if she is the ultimate self-delusionist or the world’s most accomplished liar.  For example, her couturier talking to camera about how demanding and unreasonable Imelda was, mentioned that most of his atelier had to work 24 hours per day to finish the intricate hand embroidery on all her many dresses, so much so several went blind. The next frame Imelda bursts into her usual mantra about ‘love’ ‘beauty’ and ‘truth’ without any hint of irony.  And as to the tragedy regarding the Film Festival Center  that she ordered to be built to rival that of Cannes in such a hurry that it the different layers of cement  never settled and at least 20 workers died when their scaffolding collapsed AND were left buried in the cement in the finished building.  Never happened said The First Lady, but the building has never ever been occupied as the locals fear there are souls that are not at rest there. 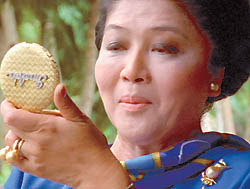 A totally fascinating enigmatic megalomaniac who was responsible for so much corruption, and even more importantly, abuse to human rights, and yet I was completely mesmerized and in awe of this magnificent over-dressed creature on the screen.  Even by giving the filmmakers unparalleled access to follow her (almost) everywhere, you were always aware that the pro in her must have manipulated them to ensure that each frame flattered her perfectly.  In the same way that she carefully considered everything she said even though so much of it were all her clichéd mantras.

Imelda loved the fact that after the matter of her shoe collection hit the tabloids around the world, a poster appeared all over New York with a pile of shoes on it.  It said ‘There’s a Little Bit of Imelda in All of Us’.  In my case I will admit its sort of true, but I know my limits. Unlike the ex First Lady I will not build a Shrine for my death that is dedicated equally to Her and Jesus.  I mean, why share the billing?

P.S. If you like movies like ‘The Eyes of Tammy Faye’ you’ll love this one.  They are similar high-drama queens, except one used to have more shoes