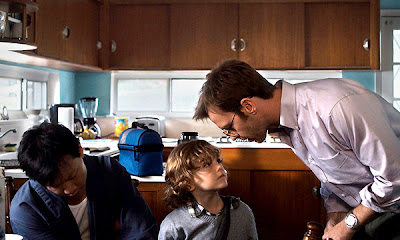 Seven  months after Chip Hines’s mother died in childbirth, Cody his father, to his complete surprise fell in love again. With a man. Joey Williams was a local Tennessean but he was also Chinese American, nevertheless Cody’s Southern parents and sibling welcomed this new addition to the family. and he soon became Chip’s second dad. 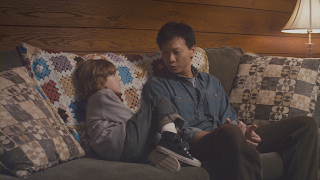 Years later Cody is in a fatal car accident and Joey is treated by the authorities as a complete outsider and excluded from all the arrangements and even being able to say a proper farewell to his partner. He calmly focuses on being a strong single parent for six year old Chip and provide some stability whilst they both re-adjust to their new situation.
However Cody’s sister Eileen turns up a Will that her brother had written some years before he had even met Joey which made her the Sole Beneficiary of everything, including the child. So on Thanksgiving Day Joey drops the boy off at Eileen’s house and is never allowed to see him again. He visits numerous Lawyers who tell him that the Law is stacked so heavily against him that he has no chance whatsoever of getting his ‘son’ back.
Friends try and  console him but the future looks pretty grim until the retired lawyer whose house he has been restoring chips in. This wise old sage infers that there may be no help within the court system per se, but if Joey could at least tell not just his story, but really why he should be reunited with Chip, then just maybe there could be a human way out.
It is a wonderfully compelling heartbreaking story in a debut narrative from writer/director Patrick Wang who also gives a riveting performance as Joey. He plays him as a calm, steady, drama-free person without a hint of histrionics or personality disorder and who never ever gets remote angry. The latter part is hard to understand initially (and trust me you’ll want to scream yourself on his behalf at times) but his real nature unfolds when he finally gets to make his Deposition, and his tranquility makes perfect sense.
Wang makes this movie very much about a ‘parent’ losing their rights and exploring what other essences of what make a family, and even though Cody & Joey are established partners, there is in fact no mention at all of their sexuality or even the word ‘gay’ once in the (too long) 169 minutes. The fact that the two men never set out their wishes in any notarized document put them in the strange legal limbo that even a straight unwed couple would find themselves in ….. but nevertheless one can not help thinking if Joey had been a woman, than the chances are that society may not have been so quick to want to take the child away.
It’s a remarkable first film : beautifully photographed with some stellar acting alongside Wang, particularly Sebastian Banes as young Chip.  The deliberate slow pacing places really doesn’t register the piece as an edgy ‘indie’ movie, but it has a lot more hidden depth than one would expect from a Hollywood studio treatment.  It was rather an astonishment to realise that so many Film Festivals passed on this, and it had  a very limited theatrical release as it truly deserves an audience.  Now out on DVD and through Netflix.
P.S.  Mr. Wang shot this 2011, but its circulation now couldn’t be a more pertinent reminder of how crucial the repeal of DOMA really was, because relying simply of appealing to the good nature of others  as here, simply will not cut it at all in real life.