Father Adam is the pastor of a minute parish in the hinterlands of Poland where he has opened a center for ‘difficult’ teenage ex reformatory boys. In this bleak countryside he, and his lay helper Michel, have fashioned their small group of unruly charges into almost responsible young men. They play football, go swimming and work together but despite his firm control over them, there is always this underlying feeling that tempers could rail up over the slightest excuse at any time, and so there is always a veiled threat of potential violence.
There is little to do in this remote hamlet and Michel’s bored and neglected wife puts the moves of a rather shaken Adam.  When he rejects her advances, he does so by explaining it is because he is ‘already taken’, which we assume refers to his Catholic vow of celibacy, and it isn’t until the second part of the story we realise its because he is not attracted to woman at all.
Adam is always focused on  being in control, but hen he rushes to the defence of Lukasz a local boy who does odd jobs at the Center on two different occasions, it starts becoming apparent that despite his intentions he has deeper feelings for him.  Lukasz is a good natured young man whose usual silence at first seems to indicate sullenness, but in fact it is he who shows the lonely Priest warmth and openness that green lights what is to follow.
Before this can happen, Adam tries desperately to repress his feelings by resorting to his old habit of getting rip-roaring drunk on his own, and he turns up the some rock music very loud and dances around the kitchen clutching a picture of the Pope as a partner. If it wasn’t for the fact that he is such a deeply unhappy man, it would be a very funny scene indeed.
Michel suspects something is amiss and tells the Bishop who lets slip that he had already had to forcibly transfer Adam from his last position. Despite the remarkable success that Adam has made of the Center, his position is considered untenable now, and this will mark the end for him.  Or will it?
This emotional charged drama has an overwhelming sense of such utter sadness for most of the story. The whole piece gels so well because Father Adam (superbly played by Andrzej Chyra) is an engaging, seriously devout priest, generous to a fault to his parishioners, but one who struggles with his human foibles. When he tries to share his secrets with another person  …. his sister … she wants to be in denial of the reality just like Michel and The Bishop, and it simply reinforces Adam’s feeling of abandonment and hopelessness. 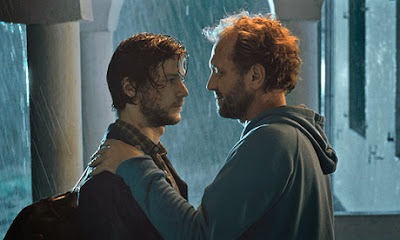 Lukasz, like the other boys, is a young adult so what we are dealing with here is not paedophilia but a consenting relationship between two man, albeit that one is considerably older.  It is his Lukasz’s final resolve that makes him appear mature enough to be a match for the Priest.
The movie quite rightly won the prestigous Teddy Award at Berlinale (the highest award for a LGBT film) for writer/director Malgoska Szumowska who is back in form after that rather odd ‘Elles’. A nod to her cinematographer Michal Englert (also co-screenwriter) for the stunning haunting feel he gave to the bleak outside landscapes in particular, and another to young Mateusz Kosciukiewicz who looked more than tad like Jesus and who played Lukasz.
What sets this remarkable and unpredictable movie apart from others that have dealt with repressed Catholic priests dealing with their homosexuality is Szumowska’s very real understanding of Adam’s personal struggle and the very straightforward way she tells his tale. The fact that its set in the Polish Catholic Church makes it that much braver, and also controversial.
Totally unmissable.