This is an old fashioned coming-out story in which a 40 year old married man and father of two finally accepts his sexuality but by trying so hard to please everyone, no-one ends up happy at all.  Based on an autobiographical novel by acclaimed New Zealand novelist Witi Ihumaera (‘The Whale Rider’) that the author held back from publishing for 20 years in deference to his young daughters, which in itself is a clue to how sad this wee tale of repression is. 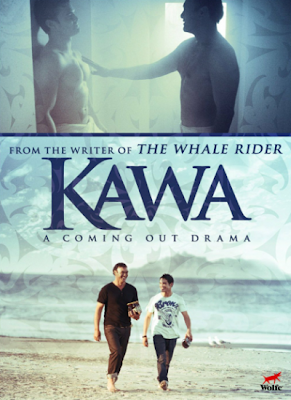 Set in Auckland, Kawa is the eldest son in a traditional Maori family and has always been pressured by his father to follow in his footsteps.  He now owns a large house, has a great job with its own swanky corner office with views over the harbor, and a wife who adores him.  The trouble is since the age of twelve, Kawa has liked men. Even surrounded by all the trappings of his success and with two children, he is very unhappy and without giving his wife a reason, he rents an apartment and moves out of the family home.
He has been seeing Chris, a very attractive young actor, (hardly dating, as its sex then off home) and Chris is obviously in love with him.  Kawa still cannot bring himself to give up either his wife or his old life so he flits between Chris and them until he gets found out and is forced to confront his family with the truth.  The reality is that Kawa doesn’t seem to know what or whom he wants even though he is loved by both of his partners, and even his father comes around to his son’s sexuality in the end.
The pros of this movie is that there is a powerful scene where Kawa’s father makes his son the official head of the family and all the men do this overtly masculine traditional warrior dance.  And then is the stunning landscape of the beautiful unspoilt New Zealand countryside and coast.
But that is really overshadowed by the  downside of the negativity where every scene dealing with Kawa’s homosexuality portrays the gay scene as completely sad and rather desperate.  The setting may be contemporary Auckland but the gay community featured here is clearly from some decades past.