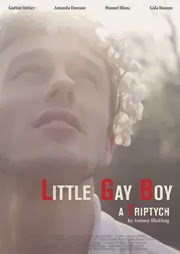 With his last short film completed French theater/actor turned filmmaker Antony Hickling brings his wonderful surreal triptych to the screen. In the nearest thing there is to a plot in this bizarre kaleidoscope of images and art, it is essentially the story of a young gay boy, from his birth to his teenage years, in which he experiments with his sexuality and his own boundaries, to the day he finally meets his father.

From the powerful opening scene in Part 1, when Maria a middle-aged overweight prostitute is visited by an ‘Angel’ to announce that she will have a child but he will experience and suffering before dying of AIDS, Hickling manages  infuse some real humor, albeit grotesque, into this outlandish scenario. In fact throughout the whole movie with its obsession with religious imagery and some, often obscure, references to both art and film with its quasi-serious tone, there is much to make one smile.

In the 2nd part, with its masochistic approach to JC’s (Maria’s son) sexuality, Hickling’s tale takes on a brutal turn as he focuses on a underbelly of society that is both exploitive and homophobic. 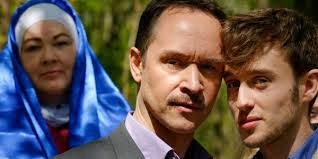 The final part : The Last Supper, where father meets son at last, is the most compelling especially visually even though its riot of fantasies can be more than a little confusing at times.  He mixes dance with performance pieces and song even as part of his multi-media approach.

Hard not to watch this exceptional piece of experimental filmmaking without making comparisons with Derek Jarman. Hickling’s vivid and boundless imagination is obviously very influenced by the late master of avant-garde queer cinema, and although he is not in the same league, it would be encouraging to think that one day he may claim his mantle.
Little Gay Boy is an undoubtably an acquired taste and is for real cineastes and art lovers.  There is a market for film like this that push boundaries and it not afraid to take chances even at the risk of failing. This one thankfully does not, and has already been acquired by a distributor (The Open Reel) and so may show up in an Art House near you soon.