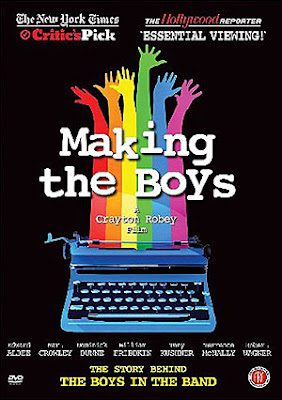 ‘Making the Boys’ is a fascinating look at the 1968 groundbreaking play ‘The Boys In The Band’, and a profile on its writer and creator Mart Crowley.  The breakthrough play about a Birthday Party full of funny, but self-hating gay men was the very first off-Broadway play written by an openly gay man which was all about gay man. Pre-dating the Stonewall Riots by some months, the play was a sensational success and ran for an unheard of 5 years.  Whilst everyone applauded its achievement by being a definitive moment for what would become the gay movement, many hated the sad lonely stereotypes it portrayed.  By the time it was made into a movie picture in 1970 the progress that the play had been a part on had moved things in the gay community forward at such a pace, that the plot had already started to look dated.

When Crowley’s play was premiered it shouldered the burden of being the only visible gay thing for the ‘outside world’ to see and clearly earned it’s place in the annals of our history for that alone.  For the actors who ignored the advice of agents and friends there was success and acclaim, but as Crayton Robey’s documentary uncovers, most of their careers suffered as a result.  And there is an extremely touching part of the dialogue when Robey reveals also that many of them died from AIDS too.

Crowley admitted to quickly blowing his new found wealth and when his next play flopped, he retreated to Europe with his tail between hIs legs.  It was only when his good friend Natalie Wood persuaded him to come back to Hollywood to write and produce ‘Hart to Hart’, hubby Robert Wagner’s new TV series did he return, and she later cajoled him to joining AA, an act he says saved his life.  He comes over as an extremely likable person, possibly lacking the gravitas of other gay writers interviewed here such as Edward Albee and Larry Kramer, and even a tad modest when accepting the fact that ‘The Boys’ was such a defining moment in (gay) history.

If I have one thing to take issue with in this documentary is the fact that amongst the impressive roster of movers and shakers of the gay movement that Robey interviewed, he also included a couple of real lightweights from Reality TV such as Carson Kressley and a boy from Project Runway whose banal and ignorant remarks were verging on being offensive.

I never saw the play and have mixed feelings about the movie  BUT nevertheless am happy to acknowledge that it was part of the start of gay people saying ‘enough is enough’, and seeing this examination of our history reminds us that we should never take our freedom for granted, even now.