During the opening credits we see a young woman trudging through snowy streets dressed in her bedtime attire and clutching a large scrapbook which she keeps looking at time to time.  The childish drawings are her clue to tracking down the apartment of her best friend Robin which miraculously she manages to do. The year is 1977, and the city is Toronto, and Liza has just escaped from the Mental Hospital that has been her home for the past seven years.  She’s a schizophrenic and is haunted by nightmares of a ‘bonecrusher’ out to destroy her, and whilst he is perfectly sane, Robin is also scared although his fear is about having the courage to support himself as a female impersonator.
Fear is not the only thing that this unlikely pair of best friends have in common, as both of them have rather miserable sex lives.  She has a penchant for taxi drivers with whom she is a tad too quick to put out for, and he has trouble attracting men who are not put off by the fact that he’s a drag queen.
When he does give up his day job as a hairdresser (his flamboyant boss is worried about having a gay member of staff anyway!) he hotfoots it to New York to see if he can break into the Club circuit.  He has to leave Liza behind as despite her Doctors remonstrations she is pregnant by one of her taxi drivers, but his luck changes via another cab driver …. a gay one who just used to be a William Morris Agent …. who starts to manage Robin’s career. 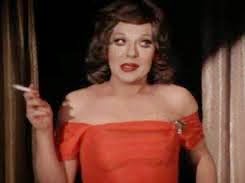 The movie is really an excuse to showcase his talent …. Robin…. or rather Craig Russell who plays him …. is an exceptionally talented old-school female impersonator who not only looks like a whole stream of famous divas but sings and performs exactly like them too. He is a class act and a joy to watch and he reminds you what a really good Drag performer was like almost 40 years ago. 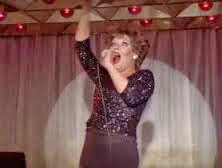 This slightly far fetched story is completely true as it was based on Russell’s life when he had been roommates with Margaret Gibson a writer.  His character is warm and wonderfully generous with the frightened Liza who turns up in New York after giving birth to a still-born baby. She probably would be re-hospitalized if it wasn’t for his support and he neither smothers or patronises and simply tells her “There’s nothing the matter with you. You’re alive, and sick and living in New York – like 8 million other people.
In his private life Russell who had been the President of the Mae West Fan Club when he was a school, never identified as ‘gay’ and in fact married and fathered a child. He sadly died in 1990 from an AIDS related illness.  The movie won Russell a coveted Silver Bear Acting Award at the Berlin Film Festival in 1978 and became the peak of his career.