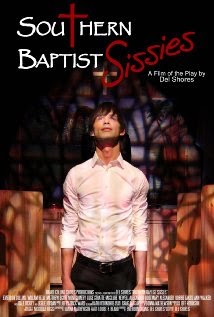 Fourteen years ago writer Del Shores followed his gay cult classic play ‘Sordid Lives’ with another dramedy that takes a hefty swipe at the conservative Baptists stance on homosexuality. Since its premiere it has been very successfully performed extensively in regional theaters throughout the country, but unlike its predecessor it has never found its way on to the silver screen, either big or small. Until now that is.  Last year rectified Shores this omission when he directed a theatrical production in LA which he filmed in front of a live audience to make Southern Baptist Sissies the movie. 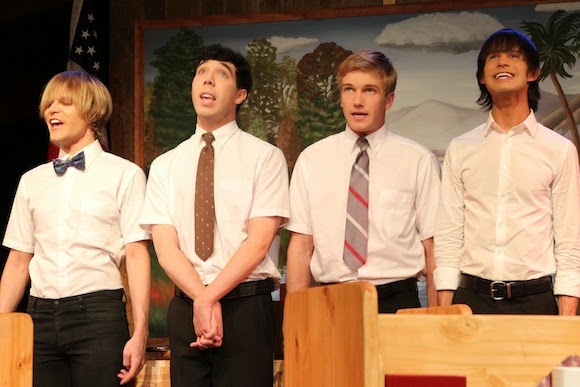 The action is set in Shores’s beloved Texas and it follows four ‘good Baptist’ boys from childhood to their early twenties as they all struggle with their sexuality in varying ways. Mark is the most outspoken (and acts as the narrator) and questions how their Church can preach love and forgiveness whilst passionately decrying homosexuality; Andrew was the first to embrace Jesus as his savior and men as his potential partners and is the one who wrestles most with the conflicting pressures that they bring. Benny is the most open of the group and has not only fully embraced his gayness but has welcomed it with open arms as he develops his career as a drag queen entertainer. On the other hand T.J. a real jock is in complete denial of his deep attraction to Mark and would rather marry a woman than accept who he really is.
There is a great deal of melodrama with each of the young men all getting more than a couple of moments in the spotlight to say their heartfelt pieces, some of which come off as preachy as one of their Pastor’s sermons.  Shores certainly knows how to get his cast to use the Bible like Google where there is an answer for everything. 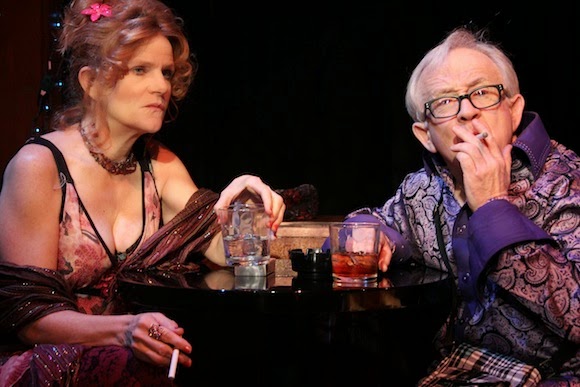 Then asides from this there are a couple of hardened and embittered bar flies, an older gay man and his new best lady friend, both hardened drinks and chain smokers, who humorously dissect their lives with a constant flow of funny stories and comments on the proceedings as they sit in a gay bar.
It’s an odd mix of highly emotional soul-bearing and chest beating on the one hand which is blended in with some really gloriously funny passages.  It’s not always 100% successful but its very talented young cast that play alongside several veteran actors who are regulars in Shores productions deserve credit for their impressive performances which make the piece gel as well as it does.  They include actor/producer Emerson Collins (‘Sordid Lives: The Prequel’), William Belli (‘Rupaul’s Drag Race’) doing all his own singing as Benny, Luke Stratte-McClure (‘All Together Now’) as T.J. and Matthew Scott Montgomery (‘So Random’) as Andrew. However even the combination of cute appeal and talent still couldnt stop them all being upstaged by Leslie Jordan and Dale Dickey with their scene-stealing outrageous bar gossip routines.
It was definitely a  bold decision to film it as a staged play, and for the most part it works very well indeed. With simple interlocking sets the action flows quite naturally but whereas a running time of 140 mins works well in a theater, it drags on the screen and could have comfortable lost at least 30 minutes with ease.
It is essentially a wonderful play about coming-of-age that shows little sign of become dated with time as the situations these young men face are universal and just as relevant today as when they were first written. This especially includes Andrew’s final resolution which sadly is the same decision many troubled souls still reach today.