As a sequel to writer/director Jon Garcia’s rather touching debut movie ‘The Falls’ this new movie follows the two gay ex-Mormon Missionaries five years on when they have long since parted and gone their separate ways. R.J. now writes on LGBT issues for a magazine and is living in Seattle and has a steady and very eager boyfriend Paul. Chris on the other hand moved back to Salt Lake City and after he went through some odious therapy to de-gay himself and was forgiven by his strict father and the Church, he found himself a wife to settle down with. Emma, like Paul, is a tad too keen-to-please and seems to obsessively cling to her husband (or he to her?) when he is not off peddling drugs to pay for their oversized home and their sweet young daughter.  He hates his job as a pharmaceutical rep. which is yet another of his true feelings he is repressing.

Then one day both men, who haven’t spoken to each other for years, get phone calls to tell them that a man they had befriend on their Mission back in Idaho has died, and so they consequently meet at the funeral.  RJ wants to talk about the past to get some sort of closure, but Chris refuses to discuss this, and yet when they go their separate ways again it is obvious that both of them are essentially deeply unhappy as they are not leading the lives that they really want. 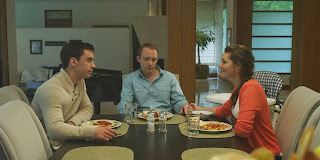 RJ dumps his boyfriend and takes a weeks leave from his job and jumps in his car to drive several hundred of miles to end up on Chris’s doorstep totally uninvited. Emma however invites him in and although Chris is still reluctant to share his feelings with RJ, when they are alone he does eventually open up to them and much much more.

Like the first movie, I have a very soft spot for this very tender love story about these two men trying to find their true selves and stop leading lives that they hated just to please others with their selfish bigoted viewpoints.  Whether it represents a true evolving re-think on homosexuality by individual members of the Mormon Church is questionable, but it makes for an interesting turn of events in this case.
Like the prequel, there are several niggling issues that one can take with this micro-budgeted movie : notably some sound quality problems, one annoyingly hammy actor (Harold Phillips) and way too long at 2 hours, but I still thoroughly enjoyed it. Asides from Garcia’s script/direction a lot of the credit goes to the two lead actors Nick Ferrucci and Benjamin Farmer who once again, gave completely compelling performances.
In the instance of the editing Garcia had the most perfect ending when the two men demonstrate their love to the entire family, and like Francois Ozon he could have left us hanging there to tie up all the loose ends as we imagined instead of continuing to allow all the  main parties yet another opportunity to explain where they stood.