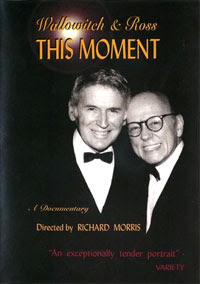 This overlooked wee gem of a documentary from 1999 is the story of two very talented performing artists, now in their 70’s, whose rather charmed life was essentially well-kept secret outside the Cabaret rooms of Manhattan.  John Wallowitch was a classical pianist and prolific popular songwriter who met Bertram Ross in the 1960’s when he was Martha Graham’s dancing partner and co-director of her Company.
In 1984, with Ross now ‘retired’ almost on a whim the two men started performing together singing mainly Wallowitch songs and those of Irving Berlin and George Gershwin too. Their act is witty and amusing but it is the repartee and the closeness of the two performers that make it the success that is. They are a extremely happy couple and without making any hint of a fuss about being gay, have had a succesfull ‘marriage’ for over 30 years.
Both men are completely adorable : Wallowitch is urbane, droll, very quickly witted with a finely tuned sense of humor; Ross still remarkably handsome with his trained dancer’s body is quiet, understated and much more of the strong silent type.

Theirs have been very full lives up this moment and its rather touching how each of the men recall how they got to where they are at this their final chapter. It’s impossible not to be moved by them and appreciate what a joyous couple they are.
P.S.  Both have passed away since this movie was filmed, but their legacy is in Wallowitch’s music still being sung, and Ross’s choreography still being filmed.  And this tender tribute of a film too.