The protagonist in this small drama is Laversky, who allegedly 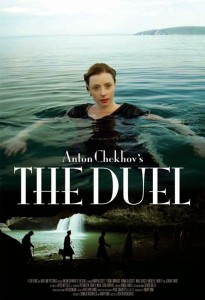 is a high up civil servant but never seems to do a stroke of work and  whiles his days away just gambling a moment and drinking.  He’s shacked up with his rather beautiful mistress in a seaside resort but the she gets word that her husband has died, Laversky loses all interest in her. This is 19th Century Russia after all, and the only people who actually work are the servants, and husbands are often mysteriously living elsewhere.
Laversky wants out, but lacks the funds to do so, so seeks to borrow some money from his friend the local Doctor who in turn is broke, so has to borrow the money from anther friend in order to lend it to Laversky.  Snag is that the third party cannot stand Laversky but covets his mistress and to cut to the quick we have the duel as in the title of the movie.
The very slight story is from a Chekhov novella, and although the movie is very pretty to look at thanks to some stunning cinematography and the fact that Fiona Glascott who plays Nadia the mistress is quite a beauty, the pace is slow and the movie drags too much.  It’s an interesting hybrid of a film: directed by an Israeli (Dover Kosahvili ‘Late Marriage’), with a mainly Irish Cast, and shot in Croatia: but’s not enough reason to want to sit through this as I discovered.
If you like historical dramas of the Russian kind then you may enjoy this pleasant diversion on some wet afternoon.