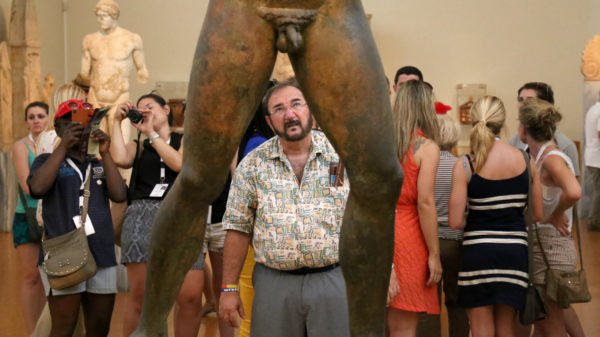 This is the prequel to filmmaker John Scagliotti ‘s Emmy Award Winning ‘Before Stonewall’ (which he produced with Greta Schiller, Robert Rosenberg), which with After Stonewall  now completes the trilogy..

Scagliotti explains that Before Stonewall was made 35 years ago and in that documentary they only went back as far as 1929 because nothing pre-dating this was readily available.  He has certainly made up for any lack of historical content, as in a tight 90 minutes he trots all around Europe and manages to squeeze in several centuries of history that clearly show that same-sex relations are as old as time itself.

More historical evidence is now available as contemporary attitudes to homosexuality change,  Like the 1st Century Warren Cup depicting two male sex acts that was bought by the British Museum in 1999 (for a cool £1.8 million), but it had been offered to them back in the 1950’s but was deemed by the Authorities as far too hot to handle.

With the help of a whole slew of experts,  amongst the historical facts Scagliotti covered were :  Michelangelo and his much younger lover Tommaso dei Cavalieri; Achilles lover Patroclus who took his place in battle and died for him ; Alexander the Great who married 3 times but the love of his life was his General Hephaestion ; and centuries later Oscar Wilde whose openness about his love of Boise landed him in prison for 3 years of hard labor.

At the beginning of the documentary Scagliotti insists on warning us that  some of the material he found was pretty ugly.  It is, however, part of the story and that he  finds himself drawn more to the beauty of our past , the heroism and the ability to struggle, to survive and even flourish.  Most important though is  to insist we will be remembered.

With this  being the 50th Anniversary of the Stonewall Riots it is the perfect time for us to both acknowledge and celebrate our past as it has helped shaped who we all our today.  Scagliotti has crammed a lot of it into his eye-opening film , that we will need to go back and re-watch so that more of it can sink in.