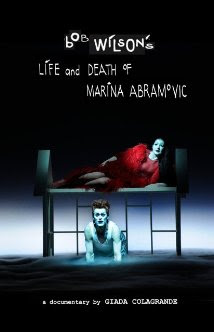 The acclaimed avant-garde theater and opera director Robert Wilson was passing through New York one day when he received an urgent phone call from his friend Marina Abramovic, the celebrated performance artist, demanding that he should see her immediately. When he protested that he was busy the whole day, she didn’t let up.  ‘I NEED you to design my Funeral!’ Now Ms Abramovic is 65 years old and in excellent health and wasn’t likely to need this service for many years to come, but she insisted that he did it right away. ‘I can see it already.’ she enthused. ‘Three identical funerals all at the same time.  All in different cities, and no-one should know which one had the real body.  It will be WONDERFUL’.

And having just witnessed a documentary that filmed the making and performance of it, let me tell you that ‘wonderful’ is hardly an adequate adjective. 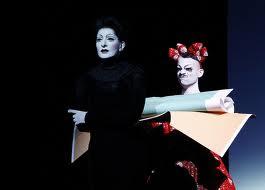 What Robert Wilson created was a performance piece/play based on Ms Abramovic’s very colorful life adding the remarkable talents of Willem Dafoe and Antony Hegarty (Antony and The Johnsons) and a whole amazing international talented cast and crew. It was a glorious visual feast combining wildly theatrical story-telling, spine-tingling music, highly stylised costumes, eye-catching hair, and strikingly imaginative sets so brilliantly lit, and performances that left one literally breathless. Wilson as the ringmaster molds it all together and choreographs every minute movement and gesture, but as he was quick to add, he never tells the performers what to think, that element they add themselves. 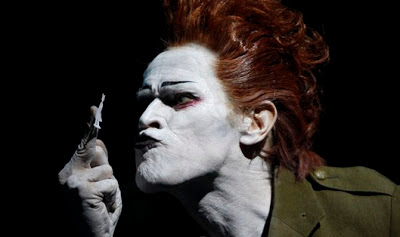 This awe-inspiring spectacle was originally performed on stage in the UK at the Manchester International Festival in collaboration with Teatro Real Madrid.  The documentary also went behind the scenes and filmed the work in progress right through to the final show. Filmmaker Giada Cologrande interspersed it with interviews and narratives from all the main players, including her husband, Willem Dafoe. (Who, with his extraordinarily seemingly limitless talent, manages to steal every single scene he is in).

After watching the documentary MARINA ABRAMOVIC : THE ARTIST IS PRESENT several times last year I was already a big enough fan just to show up at the movie theater to see this new film without even knowing what to expect.  One day later  and I am still reeling with heady excitement processing every single detail of what I saw. I cherry pick my movie choices to avoid seeing any real bummers but nevertheless still manage to see too many that I struggle to find something to get excited about. But trust me, all those hours sitting on uncomfortable theater seats is worth the wait, when you discover a real treat like this.I saw it as part of Miami International Film Festival and I have no idea where it will go next (yet) AND IT SHOULD BE SEEN.  It has one disadvantage at being just one hour long, which may rule out any theatrical release, BUT I will keep track on it.  One thing for sure, this is NOT a movie you should ever see on the confines of a TV set no matter how large the screen.

Meanwhile the Play itself will be performed again in Canada in June. Click here for information and tickets http://www.luminato.com/events/lifeanddeath/  and look out for me, as I hope to be in the front row.

P.S. If you happen to know Mr Wilson personally, please tell him I would love him to do my Funeral too. It needn’t be quite such a big production though.