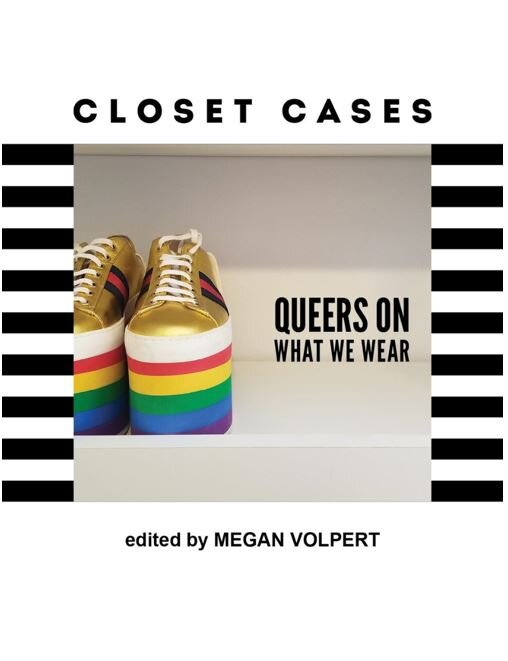 Sartorial innovation has become something of a trademark, even a cliché or stereotype, of the (in)famous ‘homosexual sensibility’ (think Queer Eye). In Susan Sontag’s 1964 essay, ‘Notes on Camp’, she writes: “A sensibility (as distinct from an idea) is one of the hardest things to talk about.” Better, perhaps, to show rather than tell, then, although this colourful book offers both word and image.

Queers are perceived, and often perceive ourselves, as style makers, or leaders, or at the very least considerably more concerned with our appearance than most heterosexuals. Perhaps because queers have either been scrutinised by a pathologizing medical gaze or rendered invisible by a denial or erasure from mainstream culture, we’re only too aware of the potency of appearance: you are what you wear. And the queers on display in this stylish coffee-table book of photographic portraits and mini-essays/poems from the impeccably attired subjects involved would seem to prove that Clothes maketh the queer.

From the significance of a flashy tie being worn in a classroom to the sexual semiotics of lesbian body hair, from leather man drag to cowboy boots –  the topics  are as diverse as the queers depicted in the photos wearing the item of clothing or outfit being written about. Every shade of the queer rainbow is here: trans, bi, nonbinary, leatherman, old-school butch – You name it.

These are tender, painful, playful testimonies to the power and importance of clothes for queers. Clothes become statements of nonconformity, of radical gender fucking, of seduction, illusion, and protection against a hostile world. One of the most moving is by Liz Leifer, in which she describes the search for the perfect jacket after their preventative double mastectomy and how the jacket, once found, in turn became the catalyst for the realisation that they were non-binary. Identity – gender, sexuality, class, race or otherwise – is at the heart of these heartfelt tales but never in a reductive or simplistic way. 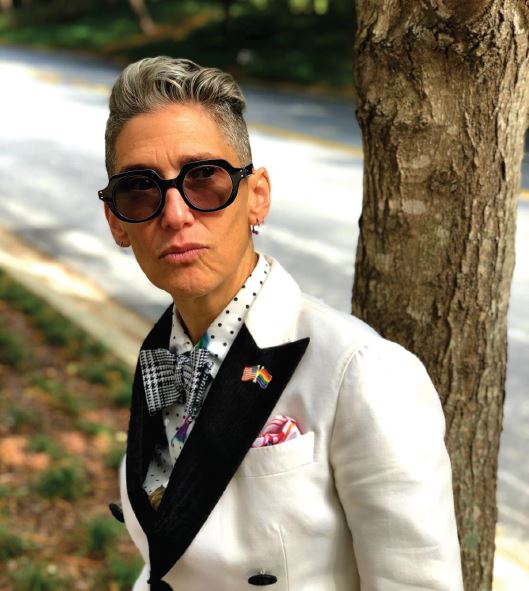 Fashion becomes crucial in  the expression of or experimentation with the ‘self’ in all its radical complexity and its paradoxical and often contradictory gestures. The selves on proud display here are all hard-won: if our bodies are battlefields then what we wear is sometimes battle dress, a statement of intent rather than a cry for attention, unwanted or otherwise; what one of the contributors, Mindy Dawn Friedman, calls ‘visual activism’.

Through a powerful mix of poetry and prose, these confessional pieces at times take on sociological resonances as the ways in which clothes function as a mode of politics is explored and teased out through personal histories of liberation and loss, struggle and nonconformity, defiance and acceptance. As the blurb on the back cover announces, this is a collection of artifacts that testifies to the power of fashion as an exceedingly queer verb.

is author or editor of over a dozen books on popular culture, including two Lambda Literary Award finalists and an American Library Association honoree. She won Georgia Author of the Year for her newest work, Boss Broad (Sibling Rivalry Press, 2019). Volpert has been teaching public high school English in Atlanta for over a decade and was 2014 Teacher of the Year. She writes for PopMatters and has edited anthologies of philosophical essays on the music of Tom Petty and the television series RuPaul’s Drag Race.

Queerguru London Contributing Editor Jonathan Kemp writes fiction and non-fiction and teaches creative writing at Middlesex University. He is the author of two novels – London Triptych (2010), which won the 2011 Authors’ Club Best First Novel Award, and Ghosting (2015) – and the short-story collection Twentysix. (2011, all published by Myriad Editions). Non-fiction works include The Penetrated Male (2012) and Homotopia?: Gay Identity, Sameness and the Politics of Desire (2015, both Punctum Books).