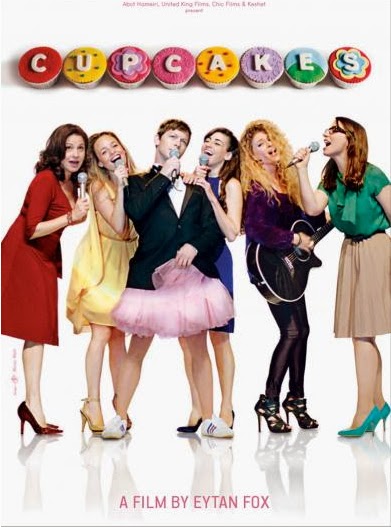 The Eurovision Song Contest,which is the epitome of the true meaning of ‘eurotrash’, really owes its continuing success to the thousands of gay men throughout the world who slavish watch the  Broadcast every year with such glee. There are few programs on television these days that are camper than this outdated competition that seeks to find a winner from amongst some of the most innocuous pop songs ever written.
When director Eytan Fox was visiting the Berlinale Film Festival a few years ago and was channel surfing in his hotel room he came across the Show and something must of clicked. Hence the man who gave us intensely serious gay dramas such as ‘The Bubble’ and ‘Yossi & Jaegar’ decided that this should be the basis of his new fluffy confection of a movie about a group of disparate friends trying to win what he dubbed as ‘Unisong’. 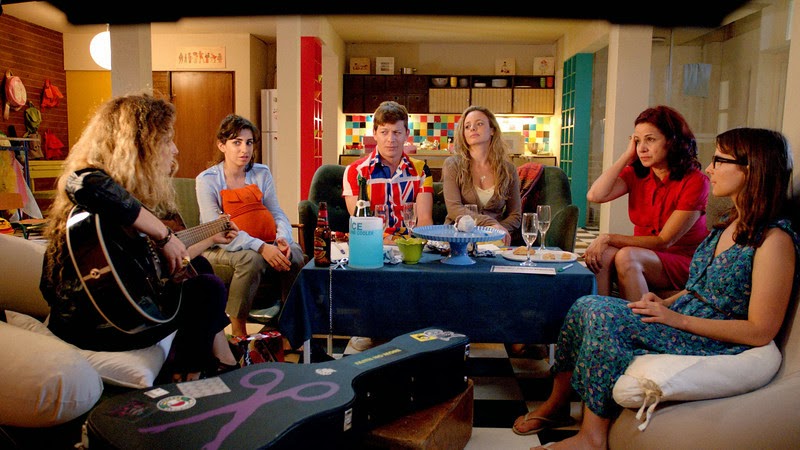 Six motley neighbors in an apartment building in Tel Aviv each with their own hangups or quirks who don’t actually want to go public, do just that when the song they write together almost by accident, goes viral on YouTube and they somehow get chosen to be the official entry for Israel.  The oldest one is middle-aged Anat whose husband has just walked out on her and their bakery business; there is serious Dana who works an Aide to a Government Minister just to please her orthodox father and who is paranoid at doing anything remotely frivolous.  Yael was once a Beauty Queen and is now a Lawyer and is also desperate to be taken seriously; there is painfully shy Karen who prefers to just share her life with her cybermates rather than step outside of her front door; and punky lesbian Efrat the alternative singer/songwriter who thinks such a frivolous undertaking as this competition is completely beneath her. It’s only kindergarten teacher Ofrat with a penchant for sequin drag who is really excited about accepting the invitation to compete, despite the pleas of his neurotic closeted boyfriend who’s family business actually sponsors the Show. 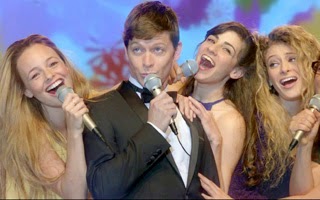 As in a typical show business fashion the professionals who decide that as they know best, they take over and create a monstrously big production routine for the group to perform. It is a total disaster as it takes out every single nuance of homespun charm, and at the same time, completely exasperates the patience of these bewildered amateurs. This is a fairy tale after all …..literally …. and they seize back the song and the competition in order for them all to win the prize, which is not actually the trophy, but mainly about them getting the lives they all really want.  Even the Baker comes back. It is after all, that kind of story.

I’m still shocked that this is the work of sober filmmaker Fox, but in this lightweight, pretty colored, camp romp he shows he can be as whimsical and entertaining as the next man.  Maybe Pedro Almodovar even.

P.S. The movie that somehow had its original Israeli title transposed from ‘Bananot'(!) has yet to be released in the USA. I do not understand why, in the same manner I never could, and still cannot, understand why Israel was ever in the Eurovision Song Contest in the first place!   Keep watching this space.