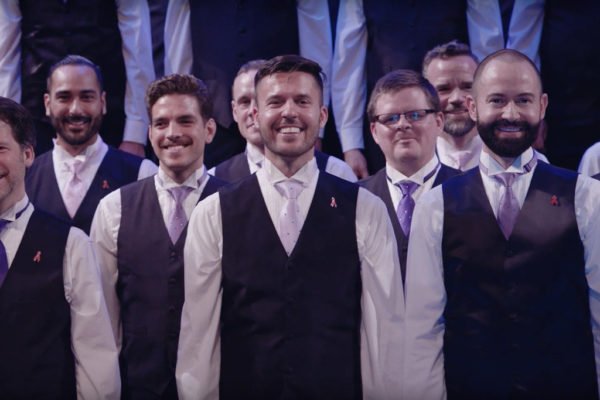 It seems like perfect timing for this new film, the debut feature from director David Charles Rodrigues, a Brazilian American equal-rights advocate.  After a new wave of homophobia bordering on violence which the present Administration seem content to sanction, the San Francisco Gay Men’s Chorus became determined to counter-balance this with a message of hope and love.

They planned a Tour in five of the deepest South Bible Belt  states which have the harshest laws against homosexuals and are home to the most bigotry as well.  Music has always been a great means for helping change minds and bringing a sense of calm to even conservative Christians whose historically-held views on our community have been agitated by the present unhealthy political climate.

Chorus director  Tim Seelig  had decided that most of the program would be based in religious music as that would appeal to most of their potential audiences, and was a far subtler way to reach their hearts and minds.  He has first hand experience about the reality of how tough discrimination can be, when years previously he had ‘come out’ in Houston and was immediately fired from his church job and literally run out of town and barred from seeing his own children.

The Tour was by no means plain sailing as some churches refused to even entertain the idea of letting them perform and occasionally there were a pitiful handful of protestors.  However they were greatly overshadowed by scenes of acceptance and general euphoria as the soaring voices of the 300 plus chorus ignited every single one of their venues ……even in the Carolinas. 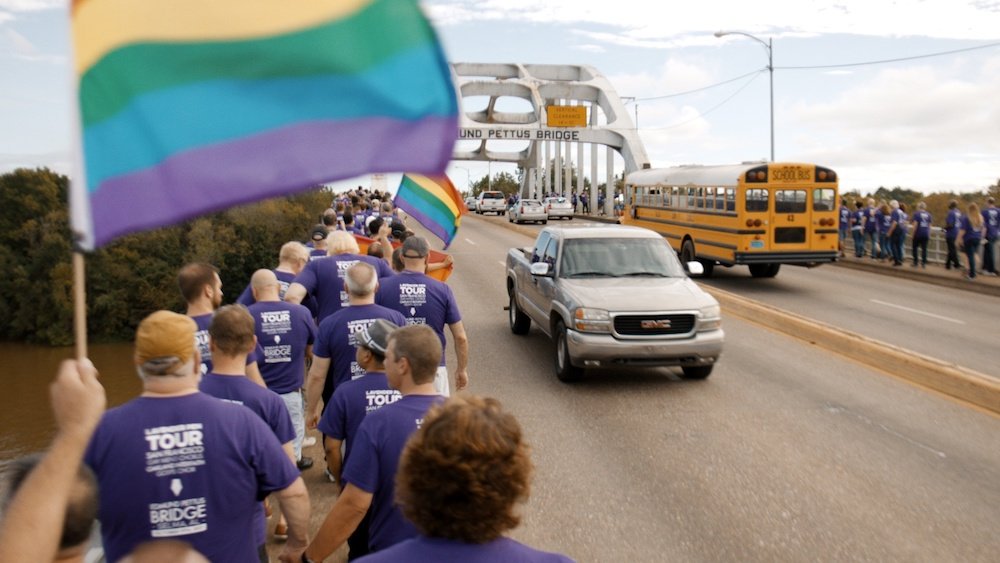 Terrance Kelly of the mainly black Oakland Interfaith Gospel Choir had reached out to the Chorus asking them if they could join them for parts of the Tour.  After singing together in Selma, the two choirs walking together crossing the Edmund Pettus Bridge singing ‘We Shall Overcome’ which made a very powerful image.

The film focused on the stirring performances and the reception they got often being invited into local peoples homes,  that it spared little time to focus on many of the choir’s members and their own life journeys. One of the stories that Rodriquez gave prominence too was that of 60-something-year-old Jimmy White, who had been estranged from his own Southern father for years, but his stepmother persuaded him to come see his son sing.  For Jimmy, about to have surgery for his cancer, this reconciliation meant the world to him.

What was equally moving was the inclusion of  Ashlé, who has sung with the chorus for years but recently came out as a trans woman. Her very presence, and in particular her own wonderful spirit, travelling these States that already passed notorious Bathroom Bills was a courageous move of her part, and which she was by the end, rightfully proud of.

Whether the Tour achieved all that it wanted is open to discussion.  What they were extremely successful in was demonstrating that when it comes to interacting with deeply conservative people, that you have far more possibilities in changing hearts and minds by sheer visibility.  The complete lack of even a hint of angry confrontation clearly showed that was a positive way open to our community in the ongoing struggle for acceptance.

Then there is the music.  It is impossible not to be swept up in the passion and artistry which will move everybody who sees the heart-string pulling documentary