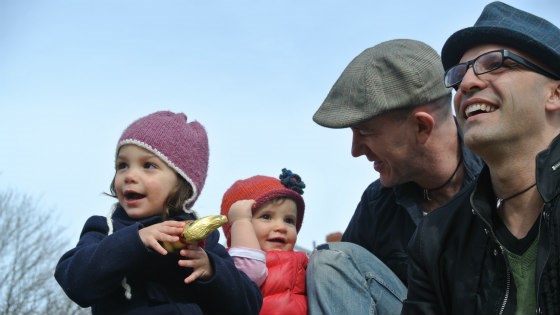 Five years ago when filmmaker Amy Geller read the extraordinary story in her local newspaper about a 40 year old mother of teenage children who was going to be the surrogate for a gay male couple for  a second time, she thought that this tale may have the making of a good documentary.  She roped in fellow filmmaker Allie Humenuk  into the project, but neither they, nor the players involved had any idea how the political and social landscape would radically change over the next few years to give this new nuclear family a whole different future than any of them could imagine.

Rachel Segall a happily married social worker just loved being a mother, and when after reading one day about the exorbitant costs and the untold challenges that gay couples encounter to become parents, she immediately offered to have a baby for her friend Erik and his new husband Sandro. The movie’s story in fact starts just days away from Rachel giving birth to the guy’s second daughter as they themselves are moving lock stock and barrel from the bright lights of NY city to Portland Maine to reinvent their lives and be closer to Erik’s family.

Now with two babies to care for in a new home in a new (freezing cold) city and with his husband traveling for work, the reality of the situation starts to sink with a slightly overwhelmed Sandro. He is a stay at home dad/writer who possess a remarkable amount of patience and is extremely good natured, but nevertheless is still showing small signs of stress.

What is particularly endearing about this entire process is that both he and Erik are completely open to sharing their insecurities with the filmmakers in such a disarmingly honest way, that we really are in their corner willing them to succeed every inch of the way.  It’s refreshing to see a regular couple who are are not the usual bionic parents who are picture book perfect in every way. 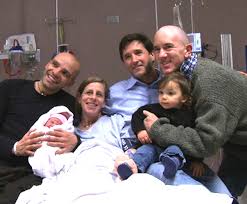 Both men came out as gay later than a lot of other men ……in fact Sandro left it too late to even tell his mother before she died.  Erik actually talks about his struggles in the past with his own internalized homophobia, yet here he is now as an openly gay married man and father, and his own church minister father introduced Sandro to his congregation. Sandro shared his news with his four siblings who have totally embraced both Erik and the children, and they all spend the month of August together back in his home town in Sardinia.

The movie filmed over five years covers the period of not just Maine becoming the first US State to legalize same-sex marriage by popular vote, but also the passing of the groundbreaking SCOTUS ruling which changed the playing fields for all US citizens. Both of these reflected the huge swing in public acceptance of the LGBT community, and also by those of people close to us too. In this scenario there was Rachel’s husband Tony who was a churchgoing Catholic, but still found it possible to support her decision to being a surrogate. On Erik’s side, his mother admitted that she had been raised in a virulent homophobic household, and she had to re-think a great deal in order to to accept her son’s sexuality  and be part of the family.

What is important here however, is a whole new fluid sense of family, and how in reality the old structures and the new compositions can, and will, sit side by side, and in Erik and Sandro’s case, actually become intwined.  They have become very close with Rachel and Tony’s own family, and likewise the Italian branch of the extended family embraces the guys and their two kids without a moment’s hesitation.

Sometimes as gay men we struggled to find out identity because a lack of positive gay role models we were exposed to when we were young, but most of us not only survived, we shaped ourselves into being what we wanted to be, and not necessary what society may have preferred for us. It’s going to be a similar situation as more of us become parents, but this however is much tougher to do completely on our own.

Geller’s gamble was a good one, and it really paid off.  What she and Humenuk produced was an excellent heart-warming documentary that shows how lucky those two young girls are to have two rather wonderful dads.

P.S. Sandro reminded us that back in Italy surrogacy is illegal and carries a jail sentence for the mother and a massive fine for the ‘father’.