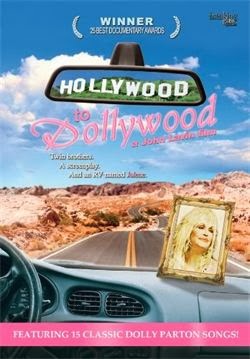 One of the very first things you learn from this enchanting wee documentary is that when you are growing up gay in a Southern Baptist family in a small North Carolina town you worship both God and Dolly Parton in equal measure.  Handsome identical twins Gary and Larry Lane, now in their mid 30’s, got as far away as they could from their childhood homes when their family struggled to come to terms with the fact that they are both gay.  Now they are living the lives they always wanted in West Hollywood, these inseparable brothers are desperate to fulfill their long-held dream. They want to present Dolly Parton with a movie script they have written for her based on her life story, and they also want their families to finally accept them for who they are.
This film then is of their roadtrip in a RV  christened ‘Joleen’ right across the country to Pigeon Forge Tennessee where Dolly is scheduled to appear in person at her famous theme park and where they are planning to get the script into her hands.  They also hope that once their family see the finished documentary it will help them appreciate the fullness of the rather wonderful lives they have shaped for themselves. 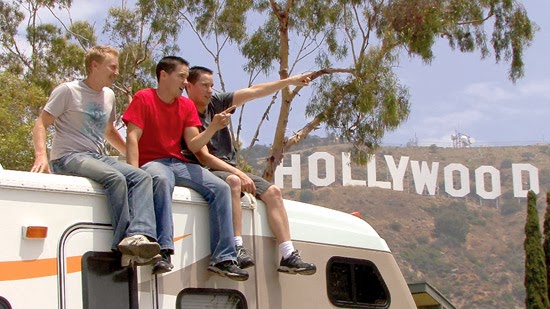 Before the start of the journey they persuade a few of their LA celebrity friends to read through the script and give them advice and any tips.  They include Oscar Winning Scriptwriter Dustin Lance Black, and actors Leslie Jordan, Chad Allen & Beth Grant. None of them are immune to the boys infectious charm and boundless good humor.
On the road with Gary’s boyfriend Mike doing most of the driving, the twins spend a lot of time verbalising about how childhood and in particular the rejection by their mother when at aged 25 they finally came out to her. She would not believe them and tried to make them swear on the Bible that they were not gay, and when they refused, she fell apart.  Even now none of the rest of the family or their neighbors know.   Such treatment would have devastated most people but not these good natured resilient twins who are still determined to be accepted regardless how long it takes them.

The rest of the trip seems to be spending time with other people who also worship at the shrine of ‘Saint’ Dolly and who are so excited to give testimony with such fervor on camera as to how she has enriched all their lives. And when the boys arrive at their destination actually manage to get a brief meeting with Dolly herself, she is so welcoming and graciously accepts the script, they feel like they have died and gone heaven.
Whether the script was any good, and whether Dolly liked it at all is really irrelevant. What makes this wee film so endearing is the twins unshakable faith in themselves and the people they love. And Miss Dolly Parton, who I would chose over God any day.
Available on DVD & VOD