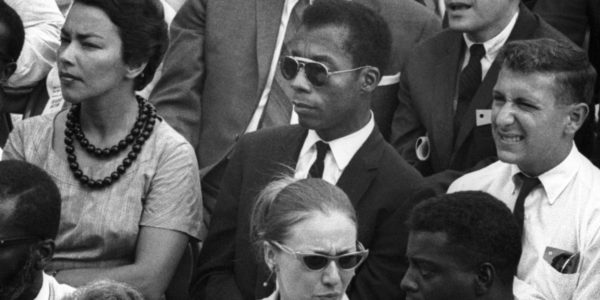 When the credits roll on respected Haitian filmmaker Raul Peck’s powerful new documentary you will notice that screenwriter listed is in fact the late author and social critic James Baldwin himself.  This memoir/semi-biography of this great African/American man of letters which links the ideas of three assassinated leaders uses only prose lifted from directly from Baldwin’s texts or letters which are read with a mixture of passion and dignity by the actor Samuel L Jackson.

In fact one of the major pieces that Peck uses is from a manuscript called Notes Toward Remember This House which was a essentially an impassioned 30 page letter that Baldwin wrote to a literary agent in 1979 to explain why he couldn’t accept a particular writing commission. He had been asked to pen a biography about the lives of three of his civil rights activists friends who had given their lives for their beliefs : Medgar Evers, Malcom X and Martin Luther King.

Baldwin lived in France from a very early age to escape what he considered the insufferable discrimination he faced as an openly gay black man. He actually called the U.S. a complex country that insists on being very narrow-minded.  Peck does in fact include in his film several of Baldwin’s TV appearances on visits to the US where he never held back on his own strident and somewhat controversial opinions. There are scenes of interviewers such as Dick Cavett being put on spot because Baldwin articulated so publicly his very realistic, and somewhat pessimistic take on society’s blatant racism.  When asked if he felt ‘hopeless about the plight of the negro‘, Baldwin simply replied that he felt ‘hopeless for all mankind‘.

However, the most remarkable aspect of Peck’s film is the way he and editor Alexander Strauss juxtapose archival footage with the prolific Baldwin’s words with video excepts of current troubled spots like Ferguson which demonstrate with disarmingly accuracy how spot on Baldwin’s fears have become a reality some thirty years after his death.

What shines through time and time again is that despite the fact that Baldwin was so out of line with with most political and social commentators at that time …… and definitely with the general public ….. he garnered respect, albeit somewhat reluctant, for his outspoken opinions and views, which one somehow feels that maybe he would not have been accorded in the present political climate.  Baldwin said at the time that racism is the source of America’s emotional and moral poverty, and that apathy and ignorance are the price of segregation.

The release of this excellent thought-provoking memoir now couldn’t be more fortuitous, and also it serves to remind us that a full biography of this great man is so long overdue.