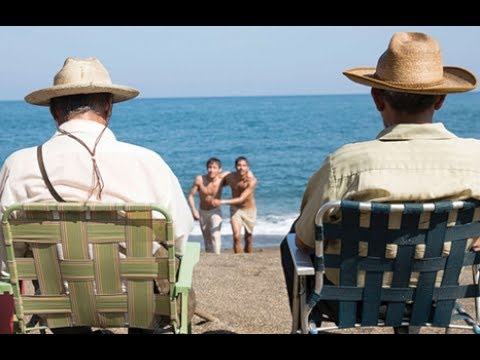 Mexican filmmaker Ernesto Contreras’s fourth feature film with a script by his brother (Carlos Contreras) is a magical mythical tale about the search for a language that is on the brink of extinction, because the last two remaining elderly speakers are bitter enemies who haven’t exchanged a word for the past 50 years.

Martin (Fernando Álvarez Rebeil ) is a young linguist expert who has traveled to a remote part of Mexico in the hope of recording some conversations with these last two people known to be fluent in Zikril. There was a 3rd person but she dies practically as soon as Martin arrives in the tiny hamlet in the jungle, so he is left with no alternative than trying to get Don Isauro (José Manuel Poncelis) and Don Evaristo (Eligio Meléndez)to agree to talk to each other.

Isauro never married but widowed Evaristo lives with his granddaughter Lluvia (Fátima Molina) who is the one who eventually shares with Martin how the two men who had been blood brothers had fallen out over a girl when they were teenagers. The twist was the fact that Evaristo had only married her to suppress his true sexuality and stop her from sharing what she had witnessed on the beach one hot summers day.

It takes time, and the bribe of a new television, to get the two men to now agree to have a conversation, and to everyone’s relief it is a great success and they actually start to renew their friendship. However this new turn of events doesn’t last long as though both men still have this deep bond for each other, whilst Isuaro remembers it fondly, Evaristo is still very ashamed and violently turns on his old friend yet once again.

This is all set against the story of trying not just trying to save this lost language, but be a witness to an ancient fading culture that is steeped in mysticism such as the mammoth cave in the jungle where the spirits take all the Zikril people’s bodies when they die. It’s a society that sees things differently than most others, but obviously not when it comes to sexuality.

It’s an intriguing movie with the back story told in flashbacks, and one that makes a great use of the rather stunning dramatic vistas. It unfolds at a slow gentle pace and even the side plot of Martin hooking up with Lluvia, doesn’t ease the sadness of the way these two men led such unhappy lives simply because they were never allowed to their true selves.