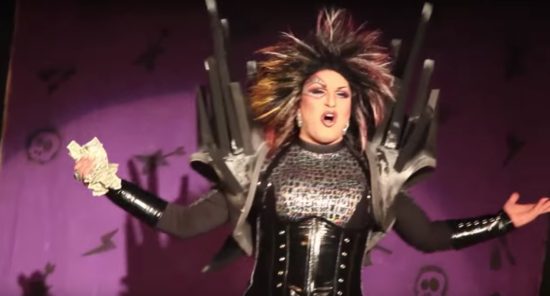 This very exuberant and enthralling documentary which portrays a rather charming hotch-potch troupe of drag performers is full of very pleasant surprises. Firstly that it is all set in the heart of the mid-west in Columbus Ohio, and secondly the arrange of talent is remarkably good, but most importantly, it is the exceptional sense of how this tight-knit diverse LGBTQ community has bonded together.

In the rather old-fashioned manner of Andy Rooney and Judy Garland, they all get together ‘to put on a Show’ to perform at a local gay club.  As the title intimates the cast are literally an odd assortment of performers from all parts of the queer spectrum, some who prefer not to be defined, and others creating their own individual identities that they refused to be boxed in with. In fact a large portion of the latter part of the movie is taken up with some in-depth articulate conversations of where some of them see their own gender identity and sexuality shaping their lives as ‘in-betweeners’.

However what puts a big smile on your face when the movie kicks off are the performances that they devote all their weekday evenings too rehearsing their somewhat elaborate routines, most of which seem to squash a large cast onto a small stage.  In the tight quarters back stage, men are piling on pounds of make-up in an exaggerated fashion and putting on ridiculously piled up wigs to go with the home-made (but very professional looking) outfits they squeeze themselves into. The drag kings meanwhile are having their chests bound with duct tape, trying to pretend it doesn’t hurt at all.

The film was real passion project for filmmaker Gabrielle Burton who made it with the production company she shares with her four sisters. Shot over five years, and using footage from different sources, it so successfully captures the sheer energy and vitality of a very delightful bunch who you end up not just rooting for, but really wanting to be their friends too.