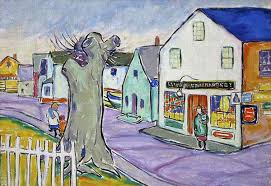 This documentary that follows the re-discovery of the art of the American artist Edith Lake Wilkinson a prominent member of the Provincetown art colony during the beginning of the 20 Century is far removed from a conventional academic study. Fueled by Emmy award-winning writer Jane Anderson who is the great-niece of the artist and who is determined to get to the bottom of the story after the discovery of a hoard of Wilkinson’s work had been uncovered after being packed away decades previously when the artist had been mysteriously committed to mental institution in 1924 and had never ever been heard of again.

Anderson who had never met her Great Aunt, but felt a enormous affinity to her because her own life mirrored Edith’s in many ways.  Both women had gone to NY at an early age to become artists,  and comparing their portfolios it is easy to see that they were both drawn to sketch very similar subjects, plus both of them were gay and partnered. Anderson, a very lively highly-emotional woman now in her mid 50’s was determined to get to the bottom of her Aunt’s story and also finally get recognition for the fine body of work she had left. Sadly she fails to ever really uncover crucial missing parts of the story like why her Aunt was ever locked away in the first place, but she does at least manage to triumphantly get a retrospective in the very place where Edith did the bulk of her work : Provincetown.

The town in the early 1900’s boasted of three important Art Schools which attracted men and women in their hundreds by the promise of being able to be part of a free-spirit colony and also to learn to paint in the extraordinary light that bathes this far tip of Cape Cod. Armed with an Ipad full of her Aunt’s work and backed up by a new website, Anderson makes several trips to P Town recognizing it from her Edith’s paintings, including a building now the Larkin Gallery which is hosting her coming home show.

Anderson greets very new snippet of fact that she uncovers about her Aunt’s P Town work with unsuppressed glee, and the confirmation that she was a major presence in her day, makes this long journey which over the years has also taken her to the West Coast, so worth while.

There is just one mis-fire in this otherwise delightful and very compelling tale and it is the fact that so desperate for the lack of real facts, particularly of the 30 years Edith remained locked up, Anderson visits with a physic medium. It is an overly long disquieting section of the movie  and it takes on the tenor of Lifetime Movie for TV and it would be much better edited out as it really distracts from the reality of Edith’s story.

Ending on a high note when Edith’s work is shown as part of the Provincetown Art Museum’s Centenary Show of the work on the prestigious printers of P Town, she has finally come home.

The documentary was co-written by Anderson and its director Michelle Boyaner, and won the Best Documentary Award at the P Town Film Festival and was screened on HBO last summer and is now available on DVD/VOD via Wolfe.