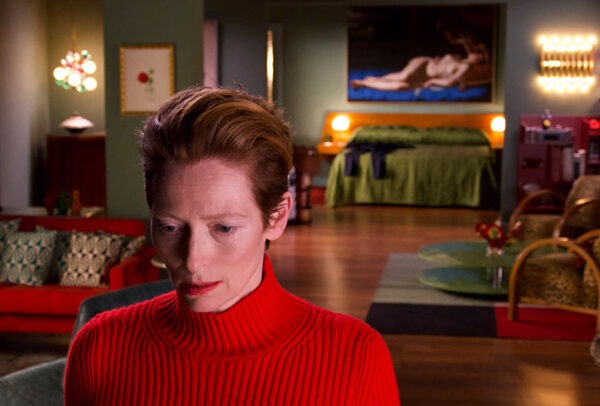 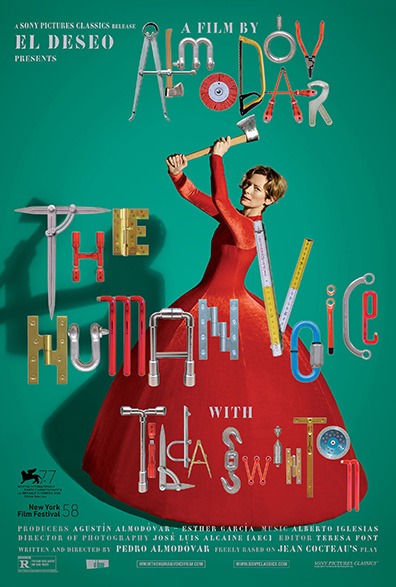 For his very first film in English the acclaimed Spanish film auteur Pedro Almodovar directs Tilda Swinton in The Human Voice a short drama loosely based on a play by Jean Cocteau.  It may be one of Almodovar shortest pieces shot in just 10 days last summer, but it is also one of his memorable and may end up being considered as one of his best ever.

We see Swinton playing a nameless women sitting with Dash her dog in her loft apartment.  By the door s a collection of luggage which belongs to her lover who has left her after being together for the past four years.  She is sitting there restlessly waiting for him to come collect.

Except he doesn’t, and she spends three restless days walking up and down the apartment.  She only leaves once and she goes to the hardware store and buys an axe.

He does eventually phone, although she misses his first call as she has passed out after taking a large handful of drugs.  When she does get to talk with him she uses the occasion to vent on a whole load of emotions.  At times cajoling him not to stop loving her, and then haranguing him for the hurt he has caused.  We can only hear her side of the conversation, but it is obvious that despite her pleas, he is not really wanting to justify or apologize for his behaviour.’

In a way the actually conversation is not the main focus here, its Swinton’s impeccable performance that keeps to you totally riveted to her.  She is a tour de force and and makes this wee melodrama so much better than it possible deserves.

Swinton and Almodovar are a match made in heaven and its a miracle they have never worked together before now .  They have very similar styles and also a talent for edgy highly stylized avant-garde work.