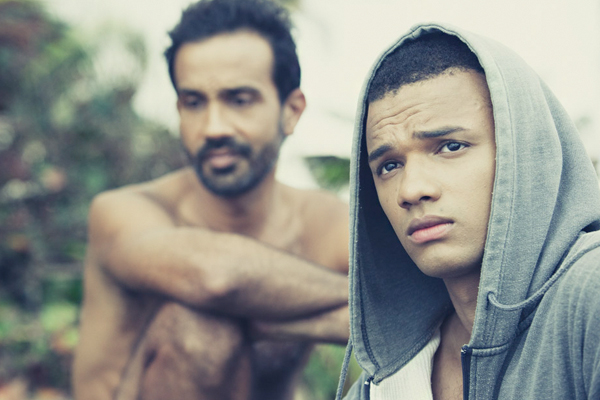 This psychological thriller is set in the Trinidad where, with its patriarchal society, homosexuality is still closeted and is very much stigmatized. Therefore this story about James an older very successful businessman (Gareth Jenkins) who befriends Gregory an 18 year old dirt-poor student (Petrice Jones) and eventually seduces him, plays out as much of a melodrama than it would do in other more tolerant cultures.

Gregory, an extremely handsome young man, seemingly accepts the sudden friendship naively giving the impression that he has no inkling of James’s intentions, but when their relationship turns physical one night, is is clear that the young man is not as innocent as he has appeared to be. The problem however, is that the next morning he bitterly regrets having had sex, whilst at the same time James is now totally hooked.

When a sullen Gregory now goes out of his way to avoid any further contact with James, the older man turns up at the very modest shack that Gregory shares with his grandmother, and ingratiates himself with her on the pretext of a link between his daughter and Gregory.  Gregory’s shame as he wrestles with his internalized homophobia turns to real anger as now James insists on keeping showing up unannounced spreading his largesse in the hope of winning the boy’s affection back, until he can take it no more.

Young British actor Jones as Gregory, who is the only experienced member of the cast made up of local inhabitants,   is clearly the best thing about this wee movie.  With his heavily accented patois (thank God for subtitles) he tries to reach out to both his best friend Dev (Akil Nickolas) and his church-going grandmother (Penelope Spencer) who both see that his obviously distressed, but he cannot possibly even hint at why. His struggle however is not just about his sexuality but the expectancy placed on him by seemingly everyone, including James, on how to shape out a future that is better than the limited one of his family who barely eke out a living.

Play The Devil set a the time of the local Carnival ….hence the title … is the third movie from writer/director Maria Govan …. and  as well as the drama, has the advantage of being shot in the rather luscious setting of the remote countryside of Trinidad.