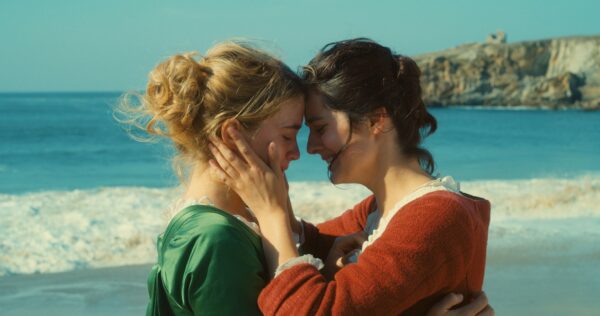 Céline Sciammawho has already given us Water Lillies, Tomboy, Girlhood and Being 17. confirms her position as one of the leading queer filmmakers with this  her latest, and finest film to date.  Portrait of A Lady on Fire is an historical drama set in the 19th Century that tells of a forbidden affair between the daughter of a French Countess and a painter.  This quiet romance that quietly brims with unexpressed desire that won the prestigious Queer Palm at Cannes, will undoubtedly win the hearts of lesbians everywhere.

The movie opens with Marianna (Noémie Merlant) a painter  making a treacherous boat ride to a remote island to an almost deserted palatial mansion as she has been commissioned to do a portrait of the daughter of the house that is to be sent to her potential suitor. Héloïse (Adèle Haenel) has only just been called back home from the Convent following the mysterious death of her older sibling.  Her mother the Countess (Valeria Golino) perceives the marriage to a Milanese nobleman as a way out from this desolate life  for her and her daughter. 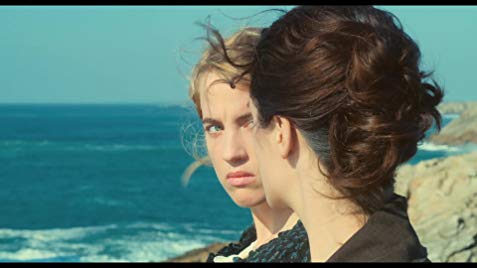 As  Héloïse is refusing to coperate with her Mother;s plan. Marianna has being hired under the pretext of being her companion so that the two women can go on walks each day.  There she can study her subject without her knowledge or suspicion  and then paint the portrait from memory at night

Before long as Héloïse starts to relax a little the two women bond and  slowly their status differences disappear and they become actual friends.  Marianna may have been staring to ensure thet she captures Héloïse  accurately for the portrait, but that change sinto lingering looks as they are both gradually falling in love with each other

Sciamma allows the relationship to unfold slowly and then has is simmering on the boil that really ups the tension.  It is no surprise by then what will happen next but the tenderness that is expressed more through words than mere physicality is really what engages us so much.  It worlds so brilliantly because of the sheer chemistry between Merlant and Haenel that positively sizzles on the screen (Haenel is actually the life partner of Sciamma).

There is also a side plot that involves the House’s maid (Luàna Bajrami) who the pair help dispose of an unwanted pregnancy involves a further equalling of the statuses of them all, and adds another dimension of feminism to the tale.

Sciamma gives us a powerful ending that not everyone will expect but it wraps up what will be universally accepted as one of the best queer movies of the year.

Nominated for a Golden Globe Award and short listed for an Academy Award Nomination too, the US release of the movie has now been set for February 2020