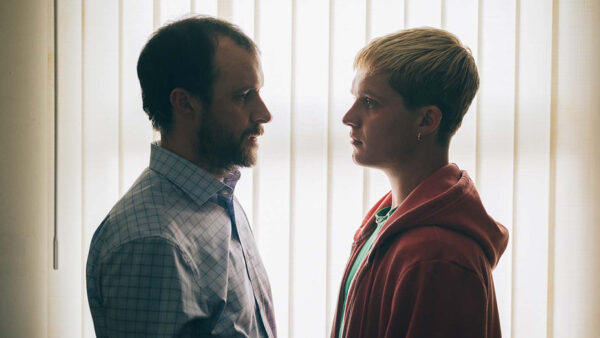 Rialto, the sophomore feature film  from Scottish filmmaker Philip Mackie Burns was written by queer Irish playwright Mark O’Halloran who adapted from his own award-winning stage play ‘Trade’. Incidentally O’Halloran also wrote the script of the stunning film Viva which in 2015 was Ireland’s Official Submission for Best Foreign Film at the Academy Awards.

The title Rialto comes from an old working class district of Dublin which we don’t see much off during the film but it is there as a constant reminder of the humble beginnings of Colm (Tom Vaughan-Lawlor) and his family. 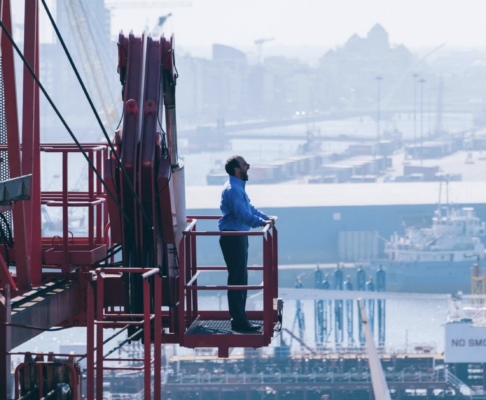 Now 46 years old he is still working at Dublin Docks as he has done since he left school.  Promoted to being part of middle-management  his ‘job-for-life’ is now suddenly at risk since the Dock’s new Dutch owners want to streamline all the working practices.

The timing is not good for Colm as his father has just died.  The man was an abusive alcoholic so here is no love lost there, but now he has to deal with the demands of his lonely widowed mother.

Its against this background that he seeks out a young hustler Jay (Tom Glynn-Carney) for a hook-up in a public bathroom. It’s totally out of character for Colm, but he quickly gets somewhat obsessed and is soon seeking Jay out for a session in a small guest house.  Neither of the men consider themselves gay  : Jay loves his girlfriend and dotes on their new born baby, and unable to get a job, this is an easy source of income.

Colm on the other hand shocks himself at how attached he wants to get to Jay, and so drowns his thoughts, and his depression by being home with his own family, by drinking heavily around the clock.  Now made redundant by the Docks and feeling even less wanted at home, his absolute obsession with misery  looks like it will never end.

Over recent years Ireland has become a great source of excellent queer movies : think The Crying Game, Handsome Devil, The Conspiracy of Silence, Viva, The Queen of Ireland etc etc.  Whilst Rialto may not qualify for this group, what it does give us however is a remarkable perception of the pressures we impose on our own masculinity. The concept of this in the film is what really remains with you long after the final credits.

Kudos to the finely tuned nuanced performances from both  Vaughan-Lawlor and Glynn-Carney, and the film itself is worth second view solely based on their portrayals of this two afflicted men