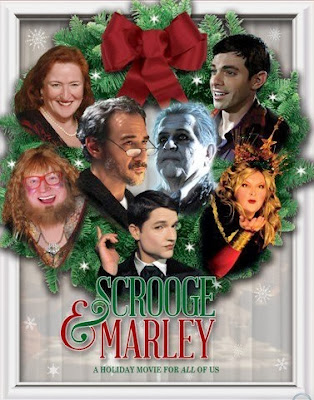 When Charles Dickens published his novella ‘A Christmas Carol’ in 1843 it’s runaway success was credited with restoring the Christmas season as one of merriment and festivity in Britain and America after a period of sobriety and somberness. Never been out of print since then, this classic tale of finding the good inside even an old miser, was chosen by Richard Knight Jr a film critic turned filmmaker as the source for the possibly first ever gay Christmas holiday movie.
The setting is transposed from the darkly-lit Victorian London to an equally dark Screws, a gay club in contemporary Chicago. The mean-spirited proprietor is Ebenezer Scrooge who seems to take great pleasure in firing people even though it is Christmas Eve. After he has managed to upset all the staff and patrons and they have left, Scrooge is alone in his small apartment when he is visited by the ghost of Jacob Marley his late unscrupulous business partner.  Marley is there of course to point out the error of his ways and to plead with Scrooge to change before it is too late.
All credit to Mr Knight and his writers for keeping to the main elements of Dickens tale and what follows are the visits of the ghosts of Christmas Past, Present and Future just like in the other 50 plus times this story has been filmed.  This time though they are all gay …. as are everyone else in this version … and it will probably be the only time that Scrooge will be whisked back to visit his past with the aid of poppers! 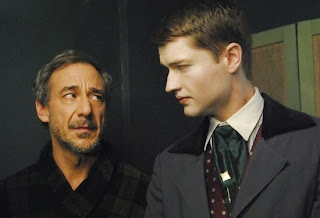 Co-directed with fellow critic Peter Neville and with a cast of seasoned theater actors …. many from the Chicago area …..this is very obviously a labor of love. and it shows.  They included veteran ‘Out’ gay actor David Pevsner who does a great job transforming ‘Ben’ Scrooge as he manages to redeem himself by the end; ex Playgirl model turned actor Ronnie Kroell who managed for once to keep all his clothes on as the Christmas Past; and the Tony Award Winner Judith Light was the Narrator. There was a fair amount of musical talent with appearances from the likes of Matt Alber to add to the festivities.
The one downer in this well-intentioned high-spirited low budget production was comedy writer Bruce Vilanch, whose embarrassingly over-the-top performance painfully showed yet once again that his enormous talents certainly do not extend to acting.
It’s entertaining enough but will hardly rank as a new Christmas classic. Still if the Holiday season means racking the sentimentality up a notch or too, and if you have a yen for gay Spirits of any kind, and have even downed a few (of the liquid type) then you’ll really enjoy this one.