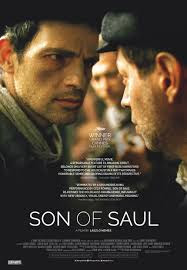 new to say about the Holocaust comes one the most powerfully disturbing movies ever that plunge you into the abysses of hell from the very first scene. This brilliant new movie is the debut feature written and directed by Hungarian filmmaker László Nemes that shows the full horror of the Auschwitz in 1944 when the Nazis had stepped up the genocide of the Jewish population.
His  story centers on a fictional member of the Sonderkommandos a select group of Jewish prisoners who were forced to assist in the mass murders of their comrades and then be responsible for disposing of their piles of their bodies.  They knew that this work only delayed their own executions for a few months, but they all lived in hoped that this may just be enough time to find a way out of this hell.
Nemes focuses on just one individual Saul Alexander a Hungarian Jew who is assigned to be part of Sonderkommando gang in Birkenau, one of the sub-camps at Auschwitz which was the largest killing centre in the Nazi’s network .  By placing the camera firmly on Saul’s face at all time he ensures that all the carnage and the stacks and stacks of dead bodies are shown in the background slightly out of focus. These long single shots from a handheld camera tracking Saul as he tries to disguise his distain for his small part in what became known as The Final Solution stuns one into a rigid numbness which never quite leaves you even when the movie ends. 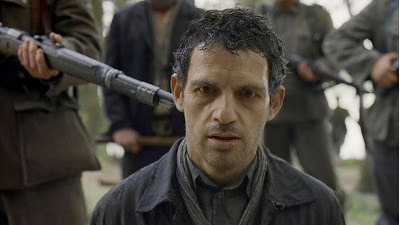 One day Saul comes across a small boy who has somehow survived the gas and whom the Doctor quickly puts to death. Saul however decides that his one goal left in life is to ensure that the boy with not get incinerated with all the others and given a proper Jewish burial.  It’s a foolhardy and dangerous decision that could end up hastening his own death, but Saul becomes totally obsessed with following through with it no matter what obstacles he has to overcome.  It’s an act of unselfish humanity in a world that has been stripped of every single strand of it.
There is a plan by a few key Sommerkomandos to escape and although that gets a tad confusing to follow at times, we are so finely-tuned to every nuance by then, so we  know that there is not a slither of a chance of a happy ending.
It’s the overwhelming sight of seeing these thousands of Jews, including young children, being herded from the trains into the dressing rooms to strip off and then immediately shuffled into the gas chambers in droves. The nightmarish screams that are heard as the gas is turned on are painfully unforgettable, and it is nigh on impossible to grasp that this is one of the worst true stories in the history of mankind.
Credit to actor Geaz Rohrig for his magnificently potent performance as Saul, but more so to Nemes for finding the perfect balance for not shirking from portraying the sheer horror of events but never either exploiting the carnage or trying to imbue it with even a hint of emotion or sentimentality.

Son of Saul won the Grand Prix at Cannes Film Festival and also a Golden Globe and numerous other Awards and deservedly the the Academy Award for Best Foreign Picture too.