Author queerguruPosted on October 26, 2019Categories queerguru.tvLabels 2019, closeted, Hassidic, Iris Prize Winner, shortLeave a comment on Phillip Guttmann : when a Black Hat is a symbol of repression 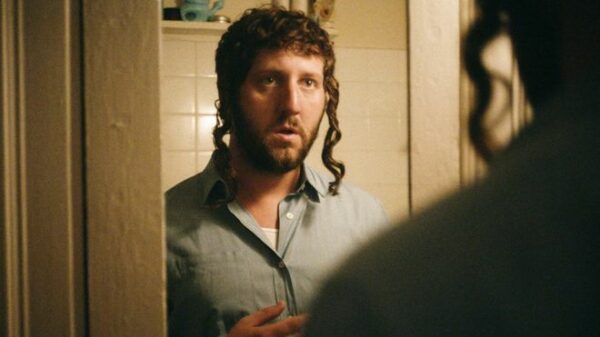 Queerguru talks with Phillip Guttmann the writer and co-producer of BlackHat a short powerful queer film that just won the £30K prestigious Iris Prize Festival : the story is of an Hasidic man living a secret double life misplaces his black hat one night which will cause his two separate lives to collide in a way he never imagined.

For details of future screenings https://www.blackhatmovie.net/

Being gay and in love with your best straight friend (who also thinks you are straight) is hardly a new tale. In fact its the one that most LGBT people have personally experienced at some time or other in their life.  It does however take on an extra frisson when it happens in a … END_OF_DOCUMENT_TOKEN_TO_BE_REPLACED

Jenny is a closeted lesbian middle-class social worker who seems to be in no hurry to ‘come out’ to her conservative Christian parents. She is content enough to go along with her family’s limited imagination as to why she has never ever taken a ‘date’ home in all these years.   Her two siblings are … END_OF_DOCUMENT_TOKEN_TO_BE_REPLACED

This debut feature from newbie Cuban filmmaker Marilyn Solaya is a grim tale about a transsexual’s relationship with a naive straight man back in the country’s dark days of 1994 before the President’s daughter Mariela Castro started to champion equal rights and tolerance for the LGBT community.  This particular story is based on a real life one … END_OF_DOCUMENT_TOKEN_TO_BE_REPLACED

Nolan Mack is a 60 year-old educated and cultured man who has been seemingly content with the same rigid routine day-in and day-out for decades. From the suburban Bank that he has worked as a Loan Officer for 26 years to the home he shares with his wife Joy even though they have totally separate … END_OF_DOCUMENT_TOKEN_TO_BE_REPLACED