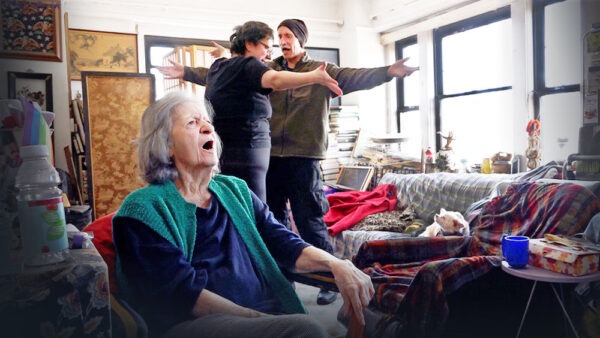 This 2017 documentary from Brit filmmaker Vanessa Stockley about the toxic relationship between 92 year-old former opera  singer and her 55 year-old embittered daughter is one helluva tough view.  Drawing immediate comparisons with the more famous eccentric mother/daughter duo in Grey Gardens, but this new film severely lacks the humor and affection (albeit twisted) of the impoverished aristocratic Bouvier Beales.

The Genius and The Opera Singer starts when Ruth has finally been allowed to leave the Nursing Home were she had been committed too a year ago after been deemed ‘incompetent’.  Why Jessica petitioned so hard to get her mother released is really unclear, as once back in their cluttered and cramped penthouse apartment in Greenwich Village, it’s a daily battle of unceasing verbal abuse. 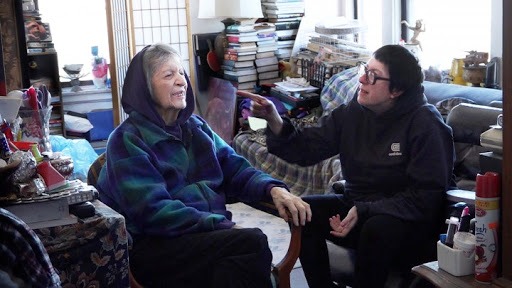 Whilst frail Ruth may bare the bulk of Jessica’s permanent state of anger, some is also dished out to the ‘evil landlords’ who want them out of the rent controlled penthouse that they have lived in for the past 50 years.  Even the local Police Precinct are on Jessica’s list of people to hate, purely because they object to her letting her yappy chihuahua ‘Angelique Jolie’ going to ‘toilet’ on their premises.

Ruth spends most of her days in bed, unless Jessica succeeds in bullying her to get up, Then she’ll recall her performing career by singing along to her collection of Frank Sinatras records.

There is no sign of Jessica having any employment but she likes to share stories of her youth when as a precious child she was hailed as being a prodigy.  It was an ambitious start which seemed to lead nowhere, even though Ruth herself enjoyed a very successful career.

The only other person that features in their tale is Robert whose claim is that he has been Jessica’s “boyfriend’ for a couple of decades.  Sitting around their apartment he is genuinely nice to the ailing Ruth which only earns him another  string of vile epithets from Jessica.  Why he stays around is totally unclear?

As we seriously question why filmmaker Stockley stuck it too, we suddenly realize it’s partly for the reason we are still viewing it : we are all voyeurs .  There may be no justification for why Jessica should blame and punish her mother for either her past or her present extreme unhappiness.  However very rarely she will drop this facade of hers and sit and sing along with her.  But those moments are too few and far between.

Ruth says that death will be a relief to her , and sadly we can see that it is  true.  How Jessica will survive without her to use as a verbal punch bag  is a total unknown, and one we do not feel a need to even consider.

I’m still completely unsure why someones’ personal hell should make compelling viewing for anyone, but this film  will find its audience out there somewhere.  Asides from me.