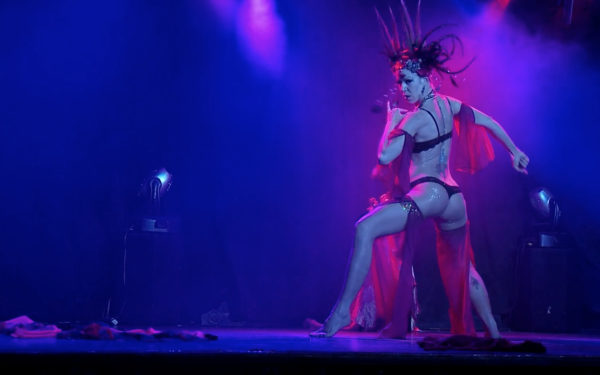 Burlesque Theater has been around in some form or enough for centuries. It peaked in England during the Victorian period and were often pastiches and parodies of popular songs and opera arias. By the time a Brit troupe visited NY at the end of the 19th Century New York, burlesque shows soon incorporated elements of popular minstrel shows, ribald comic sketches by low comedians, variety acts like acrobats, and the finale was usually an exotic dancer. This is why there are so many different sub cultures of burlesque, most shows give a different spin on burlesque.

By the 1930’s Burlesques was so popular that the exotic dancers/ strippers were big stars like Gypsy Rose Lee and Blaze Starr, and the comedy was still very risqué and smutty but was being performed by celebrated comedians such as Mae West, W. C. Fields, Jackie Gleason, and Sophie Tucker. Then with authorities clamping down on forms of stage nudity and the general decline of ‘Variety Shows’ started in the 1940’s and very soon totally disappeared.

That is until now, and the neo-burlesque movement that has been sprouting up in major cities like Portland, Oregon which is the setting for a brand new documentary called Glitter Tribe which looks at the growth of this new phenomena. Filmmaker Jon Manning profiles 12 performers who each share a zealous passion for their craft and their acts with an compulsive obsession. They are brimming over with enthusiasm for the stage personas that they have each created that allows them to step outside of themselves to act more brazen and daring than they would ever normally ever be.

Asides from this, what strikes you most about the routines they devise to perform which usually means them shedding most of the layers of their exotic costumes, is that the eroticism they create with their nudity is very sensual and sexy without even a hint of smuttiness.

There is surprisingly a great deal of humor in their routines too …… one even dresses up as giant burrito before she strips down to reveal herself as a sexy jalapeno pepper. Most of the performers are women, but Manning includes male acts like the The Stage Door Johnnies who have no problem accepting the fact that some of their audience will objectify them too as they finish their routine and strip right down until they are wearing nothing more than a post-it note.

Manning’s hand-held camera follows the performers on and off the stage as they slave over creating their lavishly decorated costumes, or rehearse their new routines, or just go about the rest of the daily lives which usually suffer somewhat because of their commitment to burlesque. They each talk about their own personal motivations, and why they are so happy about making sacrifices as although there are now several venues in Portland alone that mount shows, this is not a career that any of them will ever make a living from .

They are unquestionably a happy troupe of extremely likable players that have succeeded in reviving, or rather re-inventing, this old theatrical genre that seems to give them as much joy as the packed audiences that these shows now play too. Zora Von Pavonine one of the performers explains what drives her so beautifully with her rationale for her extreme devotion for burlesque as “Get what you want out of this lifetime, and let’s not fuck about anymore and do this we’re kinda getting by thing.”