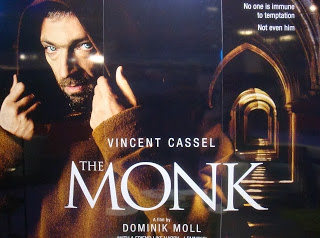 I guess it stands to reason if you write a banned novel back in 1796 that becomes a best-seller and it’s about a devout Catholic Monk who cannot avoid lurid sins of the flesh and has some supernatural elements, then it’s bound to get made into a movie once or twice over the next few centuries. This latest version has been made by German-born French Director Dominik Moll (César Award Winner) who had the good sense/fortune to cast another César Award Winner the magnificent Vincent Cassel in the title role.

Ambrosia had been abandoned as a baby on the steps of the Monastery outside Madrid and been brought up the Capuchin monks.  He grew up to become a brilliant and impassioned preacher whose sermons brought huge crowds and great fame and the odd stalker or two.  One of whom, a pretty young girl, concocts a devious plot so that she can be allowed into the tight knit cloister of monks and be close to her idol.  Her intentions are not honorable and by using some magical/witchlike powers she manages to have her way with him when he’s asleep and he wakes up none the wiser.

Meanwhile Antonia, another young woman, he made faint by the mere power of his preaching, and who is about to be affianced to a dashing young nobleman, becomes the next woman he beds.  This time he’s awake although he’s under the spell of the Devil who obviously made him do it, but he’s not cognisant of all the fact that she is the younger daughter of the mother that abandoned him many years ago.

I’m not a great fan of this genre especially when it features Catholic priests behaving badly yet once again, but I so liked the way that Moll filmed it with its heavy Gothic imagery all dimly-lit and accompanied by a dark sonorous soundtrack. I sort of expected either Peter Cushing or Christopher Lee to step out of the shadows as they did so often in one of their better Hammer horror movies. Instead it was the imposing figure of a splendid Cassel who with his stony faced expression never showed an ounce of emotion until madness crept over him.

I guess it’s a taste I never acquired, and its hard to have even the odd second of sympathy for Ambrosia, but if you have a penchant for big-time sinning Catholics and a touch of the supernatural, then this one is for you.

Out now on DVD & VOD