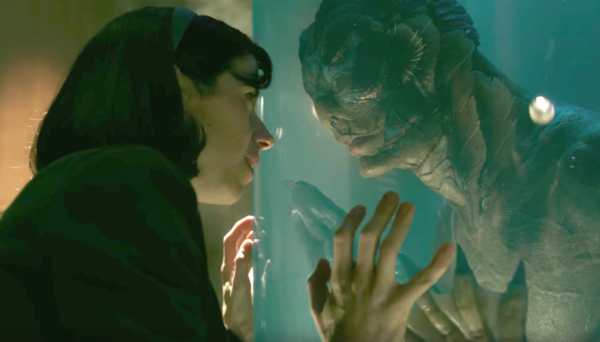 Guillermo del Toro’s flawless adult fairy tale is unquestionably one of the most enchanting screen romances of the year.  This story of the demure mute cleaning woman who finds a kindred spirit in the merman creature whom she rescues from the secret Government laboratory where she works,  is a joyous tale of hope and love that will uplift even the most disillusioned of souls.

Elisa (Sally Hawkins) is a lonely soul who has been orphaned since birth and lives in cavernous apartment situated over a struggling Movie Theater, and next to her neighbor Giles (Richard Jenkins) a closeted gay illustrator who has been banished to working freelance at home after some unmentionable incident cost him his full time job.  This odd couple are as thick as thieves and support each other in their often strange pursuits, such as Giles’s unrequited infatuation with the straight man who runs the neighborhood Pie Store.

The year is 1962 right in the middle of the Cold War era when the US was completely paranoid about Communism.  The research center that Elisa works in is deeply involved in trying to get supremacy in the space race. The scientists egged on by the Military Authorities are convinced that the creature they captured in some river in South America and shipped up to NY, has supernatural powers  that may just be the key.  They treat him with brute force to provoke responses from him to no avail,  and so led by a rather bitter Federal Agent (Michael Shannon) they vent their frustration out on the poor manacled creature.

When Elisa catches a glimpse of the merman through the glass of the tank he is constrained in,  it is practically love at first sight, and she can immediately sense that under his scary looking exterior there is a lonely troubled soul that she can relate too.  Her  workmate  Zelda (Octavio Spencer) who has always acted like her surrogate mother and protector  is discreetly aware that Elisa is breaking all the rules by communicating with the creature, and although she doesn’t approve at all, she nevertheless supports Elisa when matters get out of hand.

When the Authorities realize that they are not making any headway with the creature , they decide  it is time to kill him. When Ella learns about this development she  feels  that she has no alternative than to rescue him.

This magical tale from a  screenplay that del Toro co-wrote with Vanessa Taylor is a masterly piece of filmmaking. He gave a free hand to an extremely talented Production Designer Paul D. Austerberry and Art Director Nigel Churcher and the highly stylized results were stunning.  Del Toro made great use of the magnificent score by Alexandre Desplat which he often used a substitute for the words that Ella couldn’t speak .  With this filmmaker the detail is always i the details.

The inspired casting started with Hawkins who, in a career-best performance that will soon be acknowledged by nominations for every major Best Acting Award, was sublime as the sensitive quiet soul  who had such inner strength when it came to doing the right thing for the love of her life. She simply was such a sheer joy to watch in every single scene.

Doug Jones as the man hidden in such clever prosthetics was  beautifully  scary when he needed to be, yet was convincingly  very real when hr played the lover.  Spencer, Shannon and Jenkins all shone in their supporting roles , which del Toro  had ensured were meaty enough for them all to get their teeth into.

del Toro is a prolific filmmaker and although not all of this auteur’s output maybe such critical and commercial successes, this one sees him back on the same form as his 2006 masterpiece Pan’s Labyrinth, and we all know how that story ended.