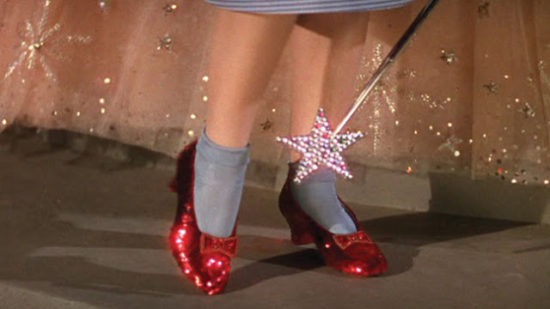 Canadian filmmaker Morgan White’s intriguing new documentary that traces whatever happened to Dorothy’s iconic red slippers after she came back home from Oz, seemed to uncover more than its fair share of red faces too. I mean who doesn’t love a pair of slippers, right? Although I must admit I’m more in favour of the warmth provided by sheepskin footwear than Dorothy’s! Don’t worry, that doesn’t make her shoes any less iconic. From Kent Warner the enterprising costumier who ‘liberated’ the shoes from the MGM Studio Lot in the 1970’s when no-one was looking, to the deluded and obsessive collectors who bought and sold them in the name of art and love, when it was very apparent that what they cared most about was making an enormous fortune out of them that could have bought Dorothy and Toto the whole of the State of Kansas if only they had known.

The first shocker White uncovers is the fact that there are rally multiple pairs of the glittery red slippers which actually makes sense as dancing down that Yellow Brick Road on all the hundreds of takes that the Director Victor Fleming made Dorothy do, must have played havoc with those very fragile sequins. One pair is safe in the Smithsonian Museum in Washington where they are the most popular exhibit there (along with the United States Flag). The other pairs (and no-one knows to this day exactly how many there are) started being auctioned off when MGM Studios was taken over by Wall Street Bankers who couldn’t wait to rapidly dispose of all the mountains of props and costumes which they deemed to have little or no value.

Morgan’s impeccable research follows some of the pairs through the decades as they keep re-appearing in the Auction rooms climbing rapidly from a few thousand to ending up as $15 million. One pair owned by a particular innocuous collector was loaned to the tiny Judy Garland Museum in her home town of Grand Rapids (who knew!) only to be stolen and thought to have been thrown into a local lake for some inexplicable reason.

In fact even though the red slippers are undoubtably the star of White’s film, he includes them as part of the wholesale destruction of the old glamorous Hollywood when very few people tried to conserve and save all that they could for the sake of it’s heritage and not simply as a means to and end. He features a great deal of the late Debbie Reynolds who single-handedly launched a crusade to buy as many of the costumes from Hollywood’s classic movies in the hope of establishing a Museum to house them. Although she invested her heart and all her money, she sadly failed and along the way was often victim to unscrupulous collectors who were more than happy to take advantage of her good nature and rip her off.

Morgan captures some interesting interviews with an odd assortment of collectors who range from merely eccentric to extremely shady, and even though he occasionally gets a tad too repetitive at times, his wee movie will still make for compulsive viewing for all ‘friends of Dorothy‘ everywhere.