With perfect timing with so much of our focus right now on the 50 Anniversary of the Stonewall Riots, the Albert Merola Gallery  in Ptown has mounted an exhibit of the work of Peter Hujar who was a witness to the events in the West Village.    Although Hujar is now recognized posthumously as “one … END_OF_DOCUMENT_TOKEN_TO_BE_REPLACED

Author queerguruPosted on May 30, 2019Categories queerguru.tvLabels 2019, PTown Pride, StonewallLeave a comment on Mark Segal Gay Iconoclast, activist and disruptor talks about being in STONEWALL on the night of the Riot

Mark Segal Gay Iconoclast, activist and disruptor talks about being in STONEWALL on the night of the Riot, and how it changed the course of his life and our Community. he talked to QUEERGURU on the eve of a Panel Discussion about Stonewall at PTown’s Pilgrim House as part of Pride Weekend 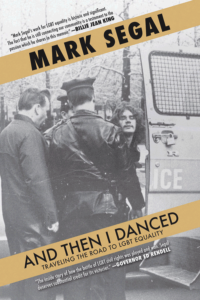 P.S.  Mark Segal’s memoir   And Then I Danced: Traveling the Road to LGBT Equality  is available at AMAZON and good Bookshops everywhere

Generation Woodstock is an ABC 20/20 Documentary Event  Special about the youth movements of 1969 that spurred the Woodstock festival and Stonewall riots.  It was 50 years ago  when two groups of young people who had become disillusioned by issues dividing the nation and all the violence surrounding them fought back and creating two … END_OF_DOCUMENT_TOKEN_TO_BE_REPLACED

Author queerguruPosted on May 27, 2019Categories queertiquesLabels 2019, gay history, StonewallLeave a comment on Before Homosexuals : a prequel to Before Stonewall

This is the prequel to filmmaker John Scagliotti ‘s Emmy Award Winning ‘Before Stonewall’ (which he produced with Greta Schiller, Robert Rosenberg), which with After Stonewall  now completes the trilogy.. Scagliotti explains that Before Stonewall was made 35 years ago and in that documentary they only went back as far as 1929 because nothing pre-dating … END_OF_DOCUMENT_TOKEN_TO_BE_REPLACED

Author queerguruPosted on February 23, 2017Categories queermatterLabels 2017, Cate Blanchett, culture, StonewallLeave a comment on Carol has finally Come Out of the closet.

Two-time Oscar winner Cate Blanchett stunned the ecstatic audience at a benefit performance at the Stonewall Inn in NY this week with her take on Dusty Springfield’s rendition of “You Don’t Own Me” which she lip-synced for her life. Carol has finally come out of the closet.