Austrian filmmaker Patric Chiha’s new movie that has just had

its World Premiere at Berlinale Film Festival is a gritty fascinating documentary about a small group of young Bulgarian Roma men who flock to Vienna in search of a better life.   When they first arrive they can barely speak any German at all and find that, just like back home, there are no jobs for them. They end up in the seedy Cafe Rüdiger in the working class district of Margareten where they find by providing sexual services to the old gay men who hang out there, they can earn a great deal more than of the elusive legitimate jobs could have offered them.

The rent boys co-operate fuller with Chiha and are frank and open about the realities of their new lives. All of them are heterosexual and although some are more  cautious about how far they will go with their clients  …… most will receive blow jobs but they refuse to give …. they seem more disdainful of the fact that their clients are old rather than of their homosexuality which doesn’t seem to cause many of them much angst at all. 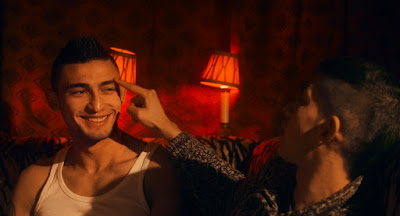 As the boys hang out and socialize together in between customers there is this overwhelming feeling of camaraderie and how that they all look out for each other with genuine concern. They are very much friends even though they may be competing for the same clients and they freely discuss their latest exploits and how much it earned. Their aim is to get enough money to buy a house and a car to set themselves up back home in Bulgaria where, even though they are in their early 20’s , they have wives and children. The one who doesn’t is lectured by his friends on how much he must save up to buy a bride, even though they admit that their own marriages are far from happy.  One confesses that he had earned a great deal of money and then fell in love with a Austrian hooker who spent all of it and then left him when he was broke again.   It’s the sense that they are all discovering how to be wild and free and irresponsible which is something that they have been permitted to do back home.

Sex plays a major role in economic migration in Europe where poor countries sit shoulder to shoulder with their wealthier neighbors and it is inevitable that kids like these will get exploited, but it is nevertheless a very fragile existence as by the end of the film the source of old men at Rüdiger start to dry up and the boys will have to make tracks back to Bulgaria anyway.