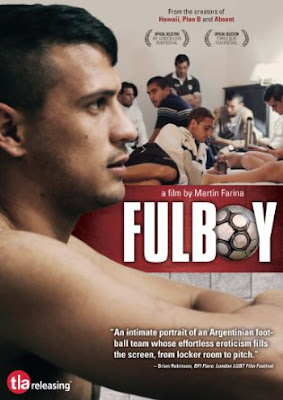 Fulboy is a very odd piece of voyeurism. Argentinian writer/filmmaker and football fanatic Martín Farina persuades his younger sibling Tomás to allow him to do a fly-on-the-wall documentary on the football club where he is a professional player. This is to be a warts-and-all no-holds-barred look at this very handsome young team totally exposed, and in fact one of the very first scenes is of them all naked showering together. Farina is desperate to discover what makes these young men tick and why they spend more time with their teammates than with their own families, but the trouble is that although they agreed to him filming they tell him point blank that they are wary of his presence and that their more natural and deeper conversations occur when the camera has stopped rolling. 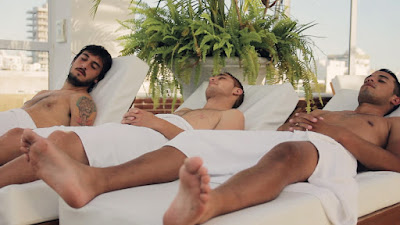 They may be reluctant to expose their inner thoughts to the highly inquisitive Farina but they do not hesitate for one single moment to expose their bare flesh. It is the very intimate manner in which Farina films all this nudity that make this an unusual highly homoerotic movie that has been released by an LGBT company even though the entire cast are straight.

To his credit Farina uncovers some of the players anxieties about their uncertainty of their contracts being renewed and what would happen to them and their families if injuries stopped them playing. They discuss this as they hang around in their hotel rooms before the game primping their selves up so that they can look when the television captures the in close up. There is a remarkable feeling of close camaraderie between these young men and as Farina catches a couple of them wrestling in their underwear in bed, it shows the bromance that they all unashamedly share.
They have cause for concern of how fickle and short their careers can be for as soon as the filming stops, so does  Tomás ‘s dream of being a professional player and he finds himself unemployed.

This is Martín Farina’s first film and on the strength of it he should have no worries about being unemployed. There is also the influence visible of one of his country’s best LGBT director Marco Berger (Hawaii) who acted as one of his producers.