intriguing new thriller is about as homoerotic as can be without crossing the divide into soft porn. Its set on a tranquil isolated lake in a beautiful corner of the French countryside where the beach front is sparsely occupied by a handful of men sunbathing in the buff. Behind them lies a small wood which is a busy cruising area for gay men.
Young Franck  (Pierre Deladonchamps) is a regular visitor to the lake each summer, and as he is currently unemployed now hangs out there most afternoons. He befriends Henri (Patrick d’Assumçao) a sad overweight man who is more interested in just chatting and sitting on the rocks rather than getting his rocks off.  Franck is however obsessed with a handsome hunk called Michel (Christophe Paou)  who with his Tom Selleck bushy mustache is another element that insinuates a distinctive 1980’s look to the whole movie.
Michel however already has a young man in tow who he takes off to the woods at regular intervals . Then at dusk one evening as Franck is leaving the woods after a quick hook up with another man, he turns to look at the lake and is horrified to witness Michel drowning his date before swimming back to shore.

Instead of being put off by the fact that the  object of his affections is a killer, Franck actually uses the absence of he young man to make his moves on Michel. It gets hot and steamy and although this excites both of them, the mysterious Michel refuses to continue when it’s time to leave the lake or even give Franck as much as a hint to what his real life is actually about.  he fact that the dead boys clothes are still lying on the beach and his car is in the car park doesn’t seem to concern anyone at all until his body resurfaces and a Police Inspector (Jérôme Chappatte) comes around asking questions. 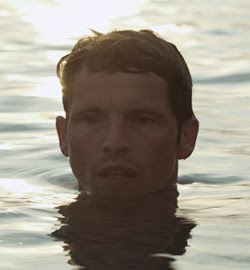 The policeman is shocked at the callous indifference he encounters and when Franck is even unable to name the man he was having sex with to support his alibi, the Inspector comments ‘you have a funny way of loving each other’.  Franck prefers to keep silent so that Michel will keep having sex with him. However Franck’s love is only Michel’s lust and when the older man suspects that Franck knows what happened that fatal night, things start to look decidedly dangerous for the younger man.

Asides from the cold-blooded murder, Guiraudie’s story is as much about carnal desire and as such he doesn’t shirk from portraying that with some very explicit sex scenes. There is no effort here to disguise the fact that these very blatant hook-ups are purely sexual and an escapism from the reality of the men’s lives. What the men will do for some momentary passion is very obvious here, but why it spurs Michel into becoming a killer is left to our imagination.