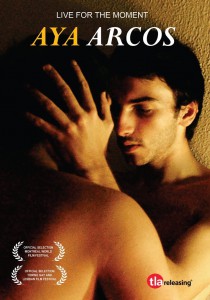 Edu is not the first middle-aged man to fall in love with a young hustler that he has picked up in the streets of Rio.  It’s not just the sex that draws him to keep returning hooking him up with Fabio time and time again as he really has developed an emotional attachment to the young man, and it seems that the feelings may actually be reciprocated.
The two men move in totally different circles. Edu is a very intense and serious intellectual and a playwright who is not in the best frame of moods as he is currently having a creative crisis due to his writers block. Fabio on the other hand, has a very relaxed carefree attitude and loves his life hanging out with his friends who also making their living hustling for sex on the streets. The differences between the two ‘lovers’ give rise to several emotional outbursts and disagreements, most of them caused by Edu who bitterly resents the fact that Fabio doesn’t seem to have a care in world. 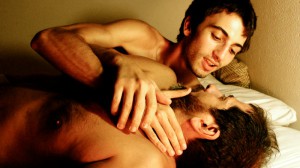 Another reason for Edu’s unhappiness is that he assumes that the 21 year -old who has unprotected sex is probably HIV+ too, and Edu is terrified that this is putting him at risk too.  When they do both eventually get tested, the unexpected results add a new layer of tension to this somewhat fragile relationship that tries its very survival.
It is all set in a very run-down part of the city which is more poor than seedy, and where old man paying for sex with young hookers is par for the course.  There is however a warmth and very definite passion with this very odd couple who try against all odds to make what they have together prosper and last, but it always very clear that their chances of succeeding, have always been very slight.
This first feature from German filmmaker Maximilian Moll made on a micro-budget is an engaging melodrama that will resound well with everyone who also believe very sweet message that life should be lived very much for the moment.
Released on DVD/Streaming in US & UK by TLA in January 2016.