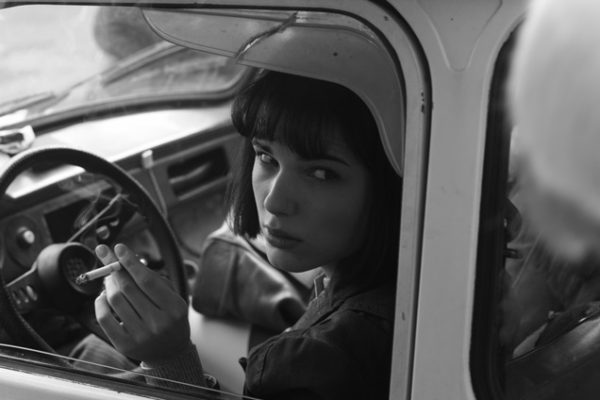 The horrifying real-life story of the mass-murderer Olga Hepnarova, who was the last woman to be hung in Czechoslovakia in 1975 aged 22 after she deliberately drove a truck through a line of people waiting at a bus-stop, makes for very bleak viewing. Shot in black and white in the bleak depressed town where this very disturbed young lady grew up, it makes no real effort to humanise her in anyway, or offer little in the way of explanation for her actions other than the words of Hepnarova herself.

Played by the Polish actress Michalina Olszanska, the movie starts with her as 14 year old Olga after a failed suicide attempt which landed her a year in a Mental Institution.  Her dentist mother (Klára Melísková) is the one of the few people that Olga attempts to communicate with but she responds with a mixture of detachment and unfiltered brutal truth “To commit suicide you need a strong will, something you certainly don’t have.”

As soon as she is able Olga leaves home and moves into a derelict hut and works away at a series of menial manual jobs which she always manages to get fired from.  It does however give her the chance to pick up other girls of her own age who are initially attracted to her awkward butch manner as a tragic loner but that soon wears off when they discover it is not an act, but exactly who she is.  That and the fact she does not like to bathe.

Olga tries desperately to get a psychiatrist to commit her to hospital treatment but the bureaucratic State Run system  is not easy to penetrate and no amount of her declaring ‘I’m a psychopath, but an enlightened one” is enough for them be able to lock her away as she wants.

When she finally lands a job as a driver it provides her with the means to follow through with her plan to kill as many people as possibly and ploughing through the line of old people kills 8 of them and seriously maims several more. Throughout her trial she impassively pleads guilty and demands that she get the full force of the law thrown at her for her pre-meditated crime that she committed because of her anger with the whole world that would never understand.

A sub-titled black & white movie about a depressed and confused lesbian truck-driver psychotic killer will certainly not be everyone’s cup of tea, but it’s number of good moments fortunately outnumber all the bad hair cuts that Olga seems to sport, which is saying something.