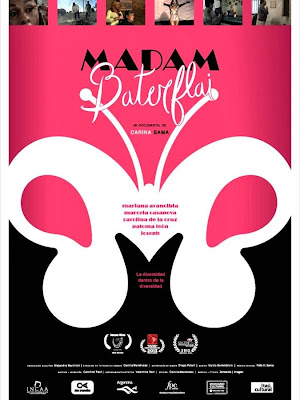 The sub-title of Argentinian filmmaker Carina Sama’s first documentary movie is ‘diversity within diversity’ which aptly covers this close study of the lives of four transvestites and one transsexual in Bolivia today.  Each of the five have made an extraordinary journey to reach the point of where they are now, and whilst most of have kept a remarkable sense of humor about their situation, for one of them, it all got too much in the end.
Mariana’s poor working-class uneducated parents seem to find seeing their son transpose into a daughter easier than anyone in the family would have imagined. When the psychologist confirmed that he/she had no male hormones in his body at all, they were advised that it was more of a matter of letting Peter/Mariana be her true self than actually making a change.  The parents own regret was that their poverty meant that they could not contribute to any of the body re-shaping surgery.  Mariana was one of the lucky ones.
Paloma is very vague of why she was given a long jail jail sentence, but once inside she met Gabriel who she has been with for 20 years now.  Together they act as ‘madam’ and bodyguard for a collective of transsexual/transvestite prostitutes who share their earnings to invest in a country farm for the days when they will have to retire from working the streets.
Joseph is the oldest of the group  and flits between wearing women’s and men’s clothes.  He’s a Buddhist which comes across in his calm demeanor as he talks about his performance art and all his close friends.
Carolina is the only one who was never gay and in fact married a woman and fathered a child before he made his choice to change his gender completely.  She is now what she should always have been. 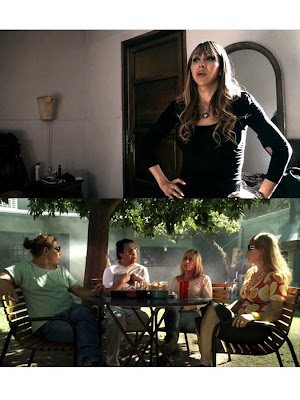 Marcela’s story is part told by Carlos her former partner who ceased their relationship when she stopped being a boy.  She is the most glamorous one of them all and although she could make a good living on the stage, or with her sewing machine, she chooses to work the streets instead.  It’s fast money, she declares, but it isn’t easy.  And in the end despite her fiercely determined words, it all becomes too much for her.
Miss Sama gives us an objective portrait of these women’s lives in such a way that we too are not expected to judge but simply observe  the choices they were compelled to make.   It was fascinating to hear each of them attest to consider themselves totally as women whether the changes they had taken to transform were no more than just cosmetic. Her interview with a local Doctor who specialized in treating gender identity disorder was particularly enlightening as he beautifully articulated how genital re-alignment surgery was not the sexual re-affirming we all assume, as by that stage his patients are very much women in every sense of the word already.
Thought provoking.