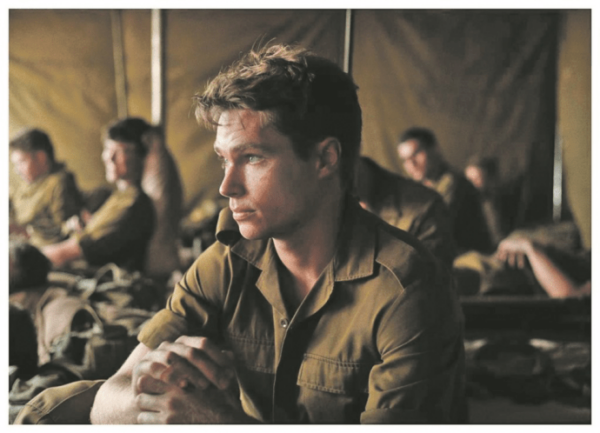 The fact that ‘moffie’ is the South African equivalent of ‘faggot’ sets the tone for one of the most harrowing coming-of-age films we have ever seen.  It is set in South Africa in 1981 in the midst of apartheid where the white minority still dominate and persecute the ‘colored’ population.  They however are not the enemy in  this war drama, as the country is obsessed with fighting neighbouring Angola with its Soviet backed troops.  If there is one thing that the South Africans hate as much as ‘colored’ people it is Communists.  It goes without saying that ‘moffies’  are on that list too. 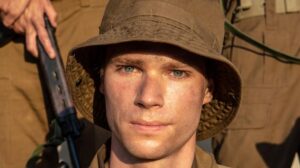 To keep the Army manned there is mandatory conscription for boys 18 years old ……some even just 16.  This is the tale of just one of them .

The film starts with a going-away party of 18-year-old Nicholas van der Swart (Kai Luke Brummer) who has been drafted into two years of compulsory military service. Nicholas is petrified a s he know he will end up at the futile and long-running  Border War where few survive.  He has reluctantly adopted his step-father’s Africaans surname so he is not picked on as a pommie bastard.  His estranged father is there too, and his parting gift, is a pornographic magazine featuring large breasted women, little knowing this means nothing to his closeted teenage son.

On the two-day army train  journey to Training Camp Nicholas quickly realises that the next two years are going to be far worse than he could ever have imagined.  All the new recruits are under the charge of the unrepentant sadistic bully Sergeant Brand (Hilton Pelser), who seems more determined to break their spirits and totally crush them physically and mentally than actually prepare them to be good soldiers. 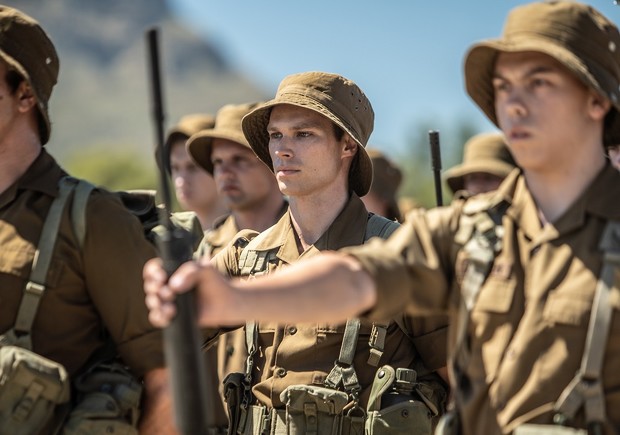 In the barracks Nicholas gets more than his share of teasing and roughhousing by the other recruits,  although strangely his size seems to stop him being picked on the most.  The  young soldier who is,  also gets the very worst treatment from the Sergeant and so we are not surprised when he takes his own life.

The pace of basic training is relentless and pushes all the young men way past their endurance level but they never dare to even think about fighting back because of the sheer fear of the Sergeant.

Things however take a turn for Nicholas who has been extremely careful not to give even the smallest hint of his potential burgeoning sexuality until one dark rainy night.  The recruits had spent all day digging trenches and were now made to sleep in them.  Stassen (Ryan de Villiers)  one of the more silent members of the troop was sharing the trench with Nicholas and suggested they also share a sleeping bag too.

It’s the most surprising and most tender scene in the whole movie and this is where Nicholas’s story really takes off. 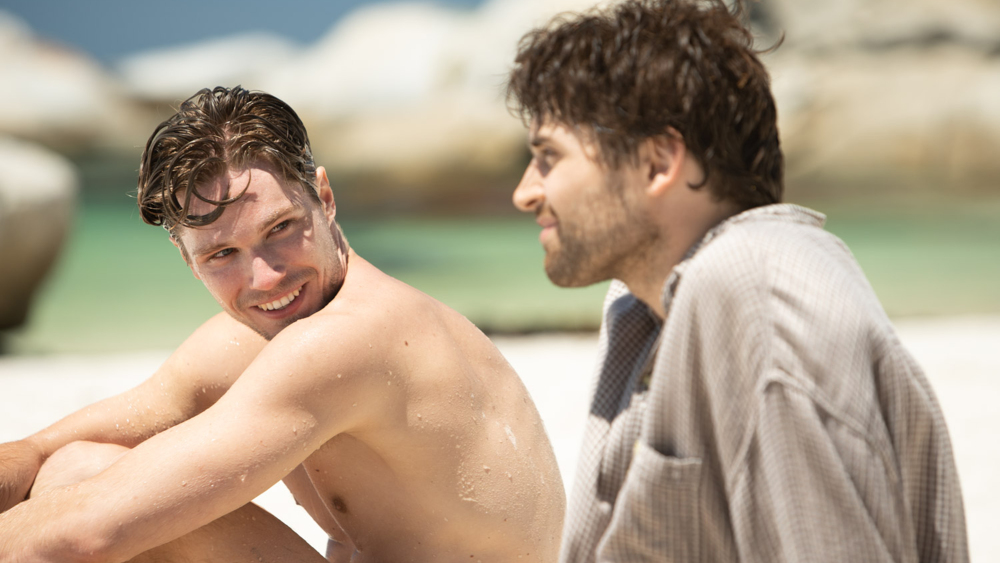 There is obvious a deep bond between the two but they never get a chance to develop it as when the troupe is furloughed one weekend, Stassen is whisked away to a Mental Hospital on some fictitious charge .

We know by now with all the despair of  the sheer amount of the ceaseless daily violence,  that even if Nicolas survives the Front, this story cannot have a happy ending.  It does however have a surprising one at least.

There is obviously  great deal of authenticity about the film as it was based on the autobiographical novel by Andre Carl van der Merwe.  Newbie actor Brummer making his feature film debut gives a compelling finely nuanced performance that makes us want to share his  anguish of having no control over a life so alien to him.  He is a sheer joy to watch.

Moffie is directed and co-written by  Oliver Hermanus whose previous  LGBTQ movie BEAUTY  that won the QUEER PALM at Cannes was also extremely violent.  He worked so  well with his cinematographer to really show the bleakness of the remote countryside  and the sheer despair of the inevitability of war.

This excellent and really moving  film serves as a reminder of how very tough the rites of passage for young gay men learning to cope with the discovery of their sexuality.  It also is a piece of history of those times in South Africa when just being a homosexual could be its own death sentence .