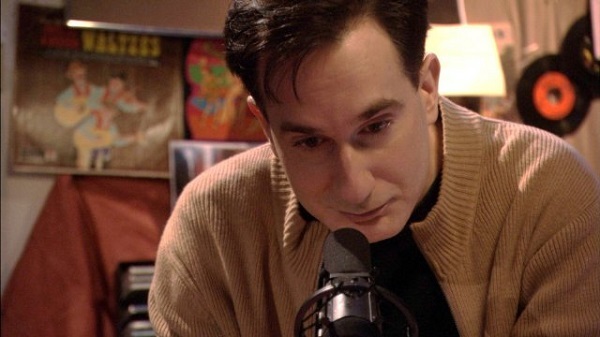 Late into the night he is Danger Dave, but when this chatty highly-opinionated dj turns off the mike after his gay radio show in Buffalo NY is over, he reverts back into shy Dave who is someone who has a hard time accepting himself let alone interacting with others. When the movie opens his show has just been cancelled and he is saying goodbye to Chris his assistant, who also happens to be his soon-to-be ex-boyfriend who is moving out of the apartment they share.  It seems like there is really no hope and no life for our hero beyond the studio, but luckily for Dave (and us) all is not lost as we soon find out in this quirky and utterly charming wee tale.

We discover more about hapless Dave’s life in a series of flashbacks and glimpses into the future, starting with an eerie confrontation in the car park with his older sister who it turns out died a few years back.  Katie had always been in her shy brother’s case even when she was alive, and whilst she raced through a few marriages of her own before her 40th birthday, David hadn’t even ‘come out’ to anyone, least alone himself, until he was 30 years old. Despite all her efforts that he refused to participate in, he had never had even a glimpse of a loving relationship yet.

It turns out that he had met Chris four years prior to him working at the Radio Station when he happened to be at the same hotel where Katie was celebrating her latest wedding and she had dragged this total stranger into the event and insisted he dance with David.  He did and for one brief moment it looked like they may have even waltzed off there and then.
However before Katie had died she had started to fulfill her long held dream that she always had of being a mother, although she even had difficulty persuading her brother to get involved and support her efforts to adopt a 9 year Brazilian orphan girl. Without giving too many of the plot twists away, when David loses his sister it seems to propel him to appreciate the fact that we never are really meant to be alone, and if we can accept that fact, and our destiny, then maybe we can find out who we really are and before it is too late.  So you can put those Kleenexes away at the end.
This impressive wee indie film was the creation of its writer and star Don Scime who adapted it from his stage play of the same name. It evidently took Scime some ten years to get it onto the screen and his passion for the project is evident from the first frame as he gives such a compelling and wonderfully low-key performance that so perfectly captures every little nuance of David’s struggle. Initially David is hard to understand, let alone like, but as the tale unfolds and we learn about he came to develop his Jekyll and Hyde personality, it all makes such perfect sense.
Currently playing the Film Festival circuit, it would be something of a tragedy if this film does not eventually get the full audience it deserves.