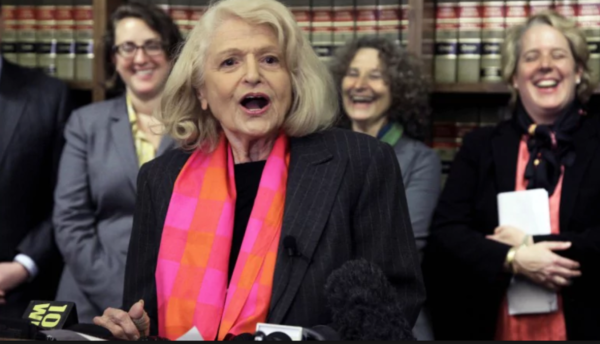 To anyone who followed the case of Edie Windsor, an unlikely looking LGBT activist, who took on the might of the US legal system and won, this extremely moving documentary from Donna Zaccaro doesn’t actually reveal anything new about this groundbreaking case.  What it does, however, is succinctly put the major facts all together in a fitting tribute and affectionate profile on this iconic woman who so rightly deserves her place in the annals of LGBT history.

After watching the 2009 film Edie and Thea: A Very Long Engagement that portrayed Edie’s relationship with her late spouse Thea Spyer, one is aware that they enjoyed an exceptionally wonderful loving relationship for decades, even though the first part of it had to be conducted in the closet.  It was after Thea died that Edie realized that not only was their relationship not officially recognized by the authorities, but they were being penalized by being served with excessive Estate Duty taxes that no straight married couple would ever be expected to pay.

Edie was a wealthy woman so her anger was not about her ability to pay but purely the inference that her marriage should be treated any less than equal.

Zaccaro, a former Today Show producer, notes that after being turned down by so many lawyers, and been advised by Gay advocacy groups not to proceed, Edie’s luck started to change when she had the good fortune to meet a feisty Jewish lesbian lawyer called Robbie Kaplan.  Kaplan not only decided to take the case on the spot but committed her very heavyweight (and expensive)  law practice to doing it pro-bono.

Although Kaplan became very emotionally attached to Edie, it was her extremely well-considered and thought-out approach that would set the wheels in motion to guarantee a victim.  From banning Edie to talking about sex in public to going to all the efforts to get Amicus briefs from so many religious leaders Kaplan was an impressive and powerful force determined to give this her very best shot.

Zaccaro also filled in on the history of how the country was evolving its views on homosexuality in general, and how politicians like President Obama had eventually endorsed same-sex marriage.  It was also President Clinton’s powerful Op-Ed piece published just before the Supreme Court hearing in which he stated that the Defence of Marriage Act (DOMA) that he had signed into power, was now unconstitutional.

There was plenty of excellent archival footage and several experts such as Evan Wolfson of Freedom To Marry, CNN’s Jeffrey Toobin and Nina Totenberg of NPR pitched in with their legal and moral viewpoints.  However as Zaccaro’s film is really a celebration of Edie’s actions, it was she who really lit up the screen.  That and the comments of Justice Ruth Bader Ginsberg who so succinctly compared civil unions as ‘skim milk marriages’.

As our community continues to grow it is so essential that we remember the history of our struggle for equality and the debt of gratitude we owe such unlikely heroes as Edie Windsor.